The Las Vegas Aces began the second half of their season with a bang overcoming a 14-point fourth-quarter deficit to escape with an 84-83 victory over the Washington Mystics.

The win is big for the Aces as they improve to 16-6 on the season. They are now tied with the Seattle Storm for the best record in the WNBA.

The Mystics loss drops their record to 8-11 and they now have just a 0.5 game lead over the Dallas Wings for eighth place and the final WNBA playoff spot. 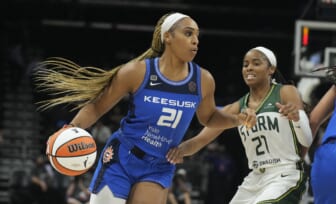 The Mystics led for almost the entire first half with their biggest lead coming in the second quarter by 21 points. At halftime, they led the Aces 50-35. Charles scored 16 of her 20 points in the first half helping lead her team to a double-digit halftime lead.

Trailing by 19 points with 31 seconds remaining in the third quarter, the Aces scored five unanswered points to cut the lead to 14.

Those five unanswered points paid dividends for the Aces as they started the fourth quarter outscoring the Mystics 15-5 cutting their lead to four points. Liz Cambage led the way for the Aces scoring nine of their first 15 points in the fourth.

Despite the Aces making a run, the Mystics still led 81-73 with 2:31 remaining in the game. From there, the Aces finished the game on an 11-2 run culminated by a go-ahead basket from Chelsea Gray to secure the win.

The Mystics will have a second chance at a road win over the Aces when they play each other again on Tuesday night.