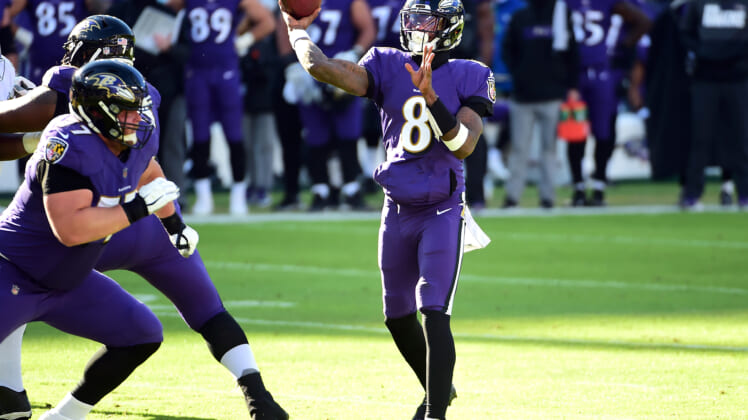 When Baltimore Ravens quarterback Lamar Jackson reported for mandatory minicamp, some hoped it would be a step towards a long-term extension. Instead, the former NFL MVP already seems to be locked in with his preparation for the 2022 season.

Jackson created headlines and some debate with his decision to sit out voluntary OTAs. However, the face of the Ravens’ franchise is back with his teammates as they get ready for training camp. Playing out the fifth-year option on his rookie deal, signing a long-term deal seems to be the last thing Jackson is thinking about right now.

Jackson seems to be taking the same approach used in 2021. Baltimore approached him about a multi-year extension, very interested in making him one of the highest-paid quarterbacks in the NFL. However, he made it clear to the organization he was focused on the upcoming season and would address matters once the year ended.

According to Jamison Hensley of ESPN, the Ravens aren’t feeling optimistic about agreeing to a contract extension with Jackson before the 2022 season. Team officials “hope” Jackson’s return to camp sparks a dialogue, but the NFL star still isn’t engaging in negotiations.

This shouldn’t come as much of a surprise to the front office. While there still might be some wishing for talks to accelerate and a deal to be signed before Week 1, it’s evident that likely won’t happen. Once that is off the table, Jackson won’t negotiate a contract during the season.

The 25-year-old’s plan is clear at this point. He’ll play out the 2022 season and then become eligible for free agency in 2023. Before hitting the open mark, Baltimore will place the exclusive franchise tag on him. Jackson will sign it immediately, receiving $30-plus million guaranteed, then delay negotiations for another year.

This seems to be the strategy and the franchise tag will only help Jackson’s objective. NFL rules dictate a deadline each year when teams can no longer sign a player on the franchise tag to a multi-year deal. Jackson will drag things out in 2023, then repeat his path in the 2024 NFL offseason.

It’s all for a simple objective. After earning $40-plus million guaranteed on the second rag in 2024, Jackson will become far too expensive to receive the tag for a third consecutive year. At that point, he can hit the open market and sign with the team that offers him the most money.