The Baltimore Ravens made it clear they are determined to get a Lamar Jackson contract extension done. While that desire remains the case, the 2019 NFL MVP is focused on bigger priorities as the team’s season begins on Monday night.

Jackson is still under contract for the next two seasons after the franchise exercised his $23 million option for the 2022 season. With the franchise tag also in play, there are no concerns about one of the NFL’s best quarterbacks leaving Baltimore anytime soon.

But the Ravens would like to get something done now, especially with the prices of elite quarterbacks on the rise. However, the team is in a unique situation that is complicating negotiations.

ESPN’s Adam Schefter reported Monday that Jackson and the Ravens have a positive, ongoing dialogue about a long-term deal. While everyone expects a deal to be finalized, Jackson’s decision to negotiate without an agent is a complicating factor.

Cutting out an agent, who would take a 1-3% of any contract, saves Jackson money. But it can also be costly, with less time for the star quarterback to engage in negotiations with one of the savviest organizations in professional sports.

Jackson is very aware of the deals his peers signed this offseason. Dak Prescott agreed to a four-year, $160 million extension with the Dallas Cowboys and the Buffalo Bills signed Josh Allen to a six-year, $258 million deal. 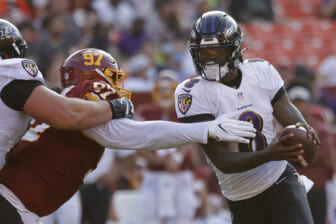 Both terms pushed Jackson’s price up even higher, easily putting him on pace to become the next quarterback worth $40-plus million per season.

Scheduled to receive $1.77 million in base salary this fall, Jackson is still in no rush to sign a deal. Given Baltimore’s offense is starting its fourth-string running back and is missing first-round pick Rashod Bateman, there’s even more weight on Jackson’s shoulders this season.

Baltimore’s bye lands in Week 8, a potential window when Jackson might have time to negotiate with the organization. Even if a deal isn’t signed this season, it’s only a matter of time until he is rewarded with a massive contract extension.