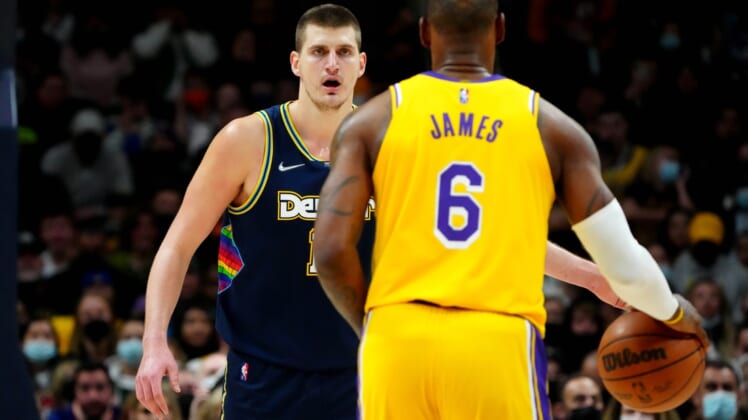 With a week left in the regular season, the Los Angeles Lakers are on the brink of not even reaching the play-in tournament.

A roster assembled to challenge for another title is finding it tough simply to stay alive.

A gut-punch loss at home to New Orleans on Friday night, in a game in which LeBron James and Anthony Davis returned to the lineup, has Los Angeles a game behind San Antonio for the 10th seed. The Lakers have no room to slip in their final five games, starting with Sunday’s matinee at home against the Denver Nuggets.

Los Angeles (31-46) has lost five in a row and eight of its last 10 to fall out of the play-in tournament bracket.

Davis had 23 points and 12 rebounds against the Pelicans in his first game since the All-Star break. However, he missed four of his five shots in the fourth quarter when the Lakers lost a six-point lead.

James, who missed two games with a sprained left ankle, had 38 points but also struggled (1-of-4 shooting) in the fourth quarter.

“The big picture is that it was pretty much a must-win for us and we didn’t get the job done,” James said.

The Nuggets can feel the same way after losing a showdown with Minnesota on Friday night. They had a chance to all-but clinch at least the sixth seed and stay out of the play-in tournament with a win over the Timberwolves but lost 136-130 at home. Denver also lost the season series between the teams, 3-1.

The Nuggets have four games remaining, two against the Lakers, and have a small margin of error to ensure they don’t fall into the play-in tournament.

“It’s frustrating. At this stage of the season, there’s no moral victories,” Denver coach Michael Malone said. “We have four games to go. We’re going to L.A. (Sunday) and that’s all we’re worried about right now, just trying to find a way to be better and beat the Lakers.”

To do that the Nuggets will have to stop committing turnovers and step up defensively. The Timberwolves shot 50 percent overall and 57.1 percent in the fourth quarter when they pulled away. Denver made it more difficult by turning it over six times in the final 12 minutes and 18 times on the night for 30 Minnesota points.

“How good are we at turning the ball over? We’re so good that it’s crazy,” said Nikola Jokic, who had 38 points, 19 rebounds, eight assists and four turnovers.

The Nuggets got a boost with JaMychal Green’s return to the lineup after missing two games but the status of Jeff Green is unknown. He ran down the tunnel in the third quarter to attend to a personal matter.