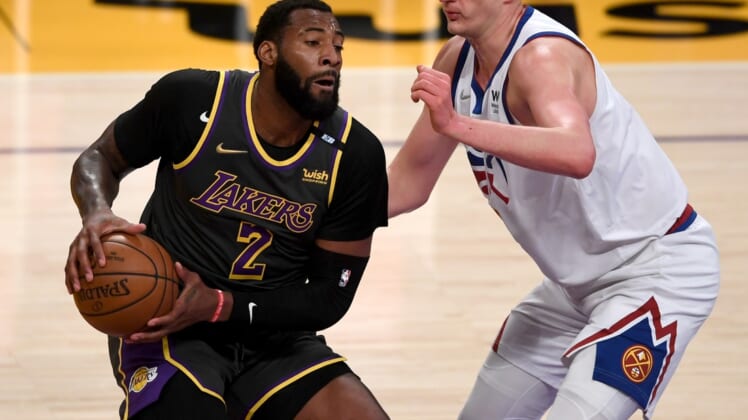 Scuffling the past week, the Los Angeles Lakers grinded out a 93-89 victory over the visiting Denver Nuggets on Monday at the Staples Center.

Playing without their two primary distributors in LeBron James and Dennis Schröder, the Lakers played with renewed energy. Anthony Davis had his best game since returning a week ago from a right calf strain, finishing with 25 points, seven rebounds and three blocked shots.

Davis came up with a key block at the end of the game on a Facundo Campazzo attempted 3-pointer to seal the win.

The loss ended Denver’s five game winning streak, as the Nuggets (43-22) dropped back into a tie with the Los Angeles Clippers for the No. 3 seed in the West.

Lakers head coach Frank Vogel said Schröder will miss the next 10-to-14 days due to the NBA’s health and safety protocols, so he’s likely out for the rest of the regular season. Schröder missed four games earlier this season for the same reason. The Lakers are now 1-5 with Schröder out.

James also did not play in the second game of a back-to-back, resting his sore right ankle. Vogel said James is day-to-day. Kyle Kuzma started in place of James, finishing with six points and four rebounds.

Nuggets guard PJ Dozier left the game with right hip tightness on a drive to the basket in the fourth quarter and did not return.

Los Angeles extended their lead to as many as 14 points in the fourth quarter and appeared in control. However, Los Angeles turned it over 20 times in the game, and the Nuggets took advantage of L.A.’s miscues late, cutting the lead to two points with 1:37 left.