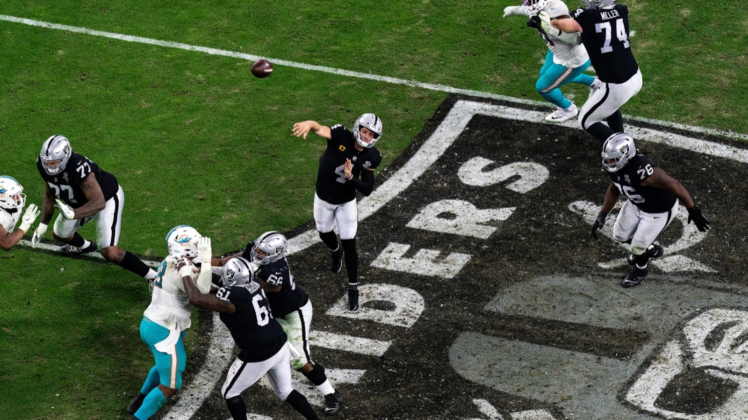 The Las Vegas Raiders have suffered a second late-season collapse over the past two seasons and while there’s plenty of blame to go around, the Raiders’ offense should shoulder a large portion of it.

After a Week 11 loss to the Kansas City Chiefs, a game in which head coach Jon Gruden described quarterback Derek Carr’s performance as “almost flawless”, the Las Vegas Raiders held a 6-4 record with their sights set clearly on making the post-season. At the same time, the Raiders offense was flying high scoring near 30 points per game.

Now, only five weeks later, and the Raiders at 7-8, they’re eliminated from playoff contention after another late-season collapse that has become all too familiar for the organization. While their defense is undoubtedly the point of emphasis heading into the offseason, it’s the Raiders’ offense – a supposed team strength – that has also faltered down the stretch leaving some questions and tweaks needed on that side of the ball as well.

After playing some of the finest football of his career in the first half of this season, quarterback Derek Carr’s play has been more inconsistent over the course of the second half. Over the last six contests, he has thrown for just nine touchdowns against five interceptions – not the numbers you expected after Carr’s phenomenal start to 2020. With the rest of the Raiders offense, Carr’s falling off isn’t want to see from your franchise quarterback when the team has an opportunity to make the playoffs for only the third time since 2002.

Early in the Thursday Night Football contest against divisional rivals Los Angeles Chargers, Carr exited the game due to injury which opened the door for quarterback Marcus Mariota to finally hit the field in a Raiders jersey.

Mariota has been the source of much news and controversy as the team gave him a 2 year, $17.6 million contract, spending quite a sizeable portion of the salary cap on a player who didn’t see the field for the first 14 games.

He played well, losing a close game in overtime, but it wasn’t good enough to steal the job from Carr who returned this past week against the Dolphins where he played a solid game. Still, the team went 0-10 on third downs and was forced to settle for three field goals under 25 yards.

Carr remains the leader of the Raiders offense going forward but his leash is tightening by the game and at the end of the day it’s about putting points up on the board. The team hasn’t scored over 31 points in the last six games, a number they beat four times in the first 10 games.

The Raiders’ offense and its struggles can’t solely be placed on Carr and head coach Jon Gruden deserves his share of the blame as well. When the team struggled to move the ball in early 2019, it was Gruden who stepped up and accepted much of the responsibility.

“I’m not going to put it all on, Derek. We take responsibility as the play-caller. I’m calling the plays and I’m designing some of the stuff, so I put it on myself.” – Jon Gruden, Sept 2019.

The Red Zone efficiency has been especially brutal as of late and it has come back to bite them in both of their last two losses. These missed opportunities have allowed opponents to hang around long enough that the defense crumbling seems inevitable.

As you can see from the tweet above, Jacobs has not been as effective in goal-line situations but the issue doesn’t lie with him. Watching the film, it’s clear the offense stagnates and oftentimes is much too conservative when it needs to be aggressive after going for touchdowns, especially when they cannot rely on their porous defense to get stops.

Darren Waller is one of the most imposing matchup threats in the entire league and is a deadly weapon. According to NFLsavant.com, Waller has 20 receptions on 26 Red Zone targets and the ball must go his way at least once every time this team gets close to scoring.

Where are the Rookies?

The Raiders spent three picks in the top eighty-one selections of the 2020 NFL Draft on offensive players, and the returns for that significant amount of draft capital have been underwhelming thus far, to say the least.

While fans and media alike can continue to talk about his effectiveness as a distraction and field-stretcher, the reality remains that that isn’t enough for a first-round selection. – on Henry Ruggs III’s lack of targets and involvement in Raiders offense

First-round selection Henry Ruggs III has shown flashes of brilliance, but they have been way too far and few between. Considering that this draft class has produced multiple rookie receivers who have been very impressive, and the Raiders had their choice of all of them, the fact that Ruggs has only 23 receptions is concerning.

There hasn’t been enough emphasis placed upon getting Ruggs the ball and using his speed to hurt defenses. While fans and media alike can continue to talk about his effectiveness as a distraction and field-stretcher, the reality remains that that isn’t enough for a first-round selection. Gruden is going to have to be more creative and figure out how to better utilize one of his most explosive chess pieces.

The team also spent two third-round selections on a pair of wide receivers in Lynn Bowden Jr. and Bryan Edwards, the former which was shipped out before the season began and the latter which has been largely invisible. Whether this was an issue in player evaluation or deployment is still not 100% clear. Either way, the team has an issue that’s going to have to be fixed if the Raiders want to create a strong prospect pipeline through drafting and development.

The good news is that the Raiders have shown that when clicking, their offense belongs among the league’s best. The offensive line is elite and by moving the ball along the ground just as well as they do through the air, they keep defenses guessing as to what is going to come next.

The bad news, for now, is that this is that two seasons in a row, the team has suffered collapses and the struggling offense has been a big factor again. The play calling has run dry, Carr has been inconsistent and tailed off down the stretch, and the rookies that the team spent significant resources on have been non-existent.

The Raiders’ offense doesn’t need a tear down, it needs to be tweaked. Gruden needs to consider surrendering play-calling duties (or at least in the Red Zone find someone with imagination) and while it felt like Carr proved himself in the first half of the year, his hot and cold streaks are going to need to be addressed. A full offseason, with activities not restricted by COVID-19, will do wonders for his connection with Henry Ruggs III and open up some of the big-play potential in the playbook.