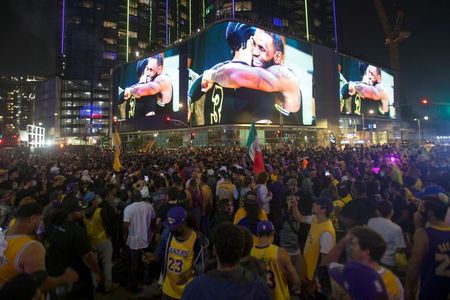 With Los Angeles hoping to celebrate another major sports title in a matter of days, the city might be paying a price for one earlier in the month.

As the Lakers progressed through four rounds of playoffs, culminating in the NBA title on Oct. 11, the Los Angeles County Department of Health says it’s highly that fans gathering to watch the games — and then taking to the streets to celebrate — played a role in the county’s surge of COVID-19 cases.

Going back to early October, Los Angeles County has seen its average number of new daily confirmed cases of COVID-19 rise from 900 to 1,200.

“It is impossible to determine the exact exposures that contributed to this increase,” the agency said Monday in a statement published by USA Today. “However, it is highly likely that gatherings to watch and/or celebrate the Lakers, along with any other gatherings that occurred 2-3 weeks ago where people weren’t wearing face coverings and were in close contact with each other, contributed to the rise in LA County cases.”

The traditional victory parade and organized public celebrations were not held because of the pandemic, although more than 1,000 people swarmed the area around Staples Center to celebrate the Lakers’ clinching win in Game 6.

“As fans continue to watch and celebrate the mighty LA sport teams, we are mindful that if individuals are not adhering to the health officer order requirements of distancing, infection control and masking, cases will continue to rise which, unfortunately, not only leads to increased illness and deaths, but also slows down our recovery journey,” the agency added in the statement.