There’s been a lot of talk about NBA champion Kyrie Irving and his future in the Association following a drama-filled past couple years with the Brooklyn Nets.

By now, you likely know about Irving’s stance against the COVID-19 vaccine and how it cost him a good chunk of the 2021-22 season. More recently, Irving was suspended by the Nets after sharing a documentary on social media with antisemitic messages mixed in.

While things have been quiet on the Irving front in recent weeks, his status as an impending free agent has come up big time. Could the seven-time All-Star bolt the Nets after four seasons? Who might be interested in the star guard?

According to this note from ESPN’s Tim MacMahon, the possibility of the Houston Rockets making a play for Irving in free agency next summer shouldn’t be ruled out.

All of this comes on the heels of a surprising report during the holiday weekend that current Philadelphia 76ers star guard James Harden is “seriously considering” a reunion with the Rockets.

There’s a lot of moving parts to this. Irving and Harden played together with the Nets for parts of two seasons before the latter was sent packing to Brooklyn in the Ben Simmons blockbuster last February. The fit seemed to be like a square peg in a round hole.

Though, it’s not known whether Houston would look to pair Irving up with Harden. What we do know is that Brooklyn’s current star point guard continues to play at a high level when he’s actually on the court.

Availability has been the issue here. Irving has suited up in 127 games since signing with Brooklyn ahead of the 2019-20 season.

There was very little interest in Irving on the trade block this past summer. The Los Angeles Lakers were refusing to commit to Irving long-term in trade talks with the Nets.

Meanwhile, former teammate LeBron James called Irving out following the aforementioned antisemitic post before reversing course and showng support. This goes to show us just how divisive of a personality Irving is around the Association right now.

As for the Houston Rockets, it could be all about returning to relevance on the broader NBA stage. Houston sits at 10-24 on the season and in last place in the Western Conference. The team has posted a 47-141 record since the end of the 2019-20 season. 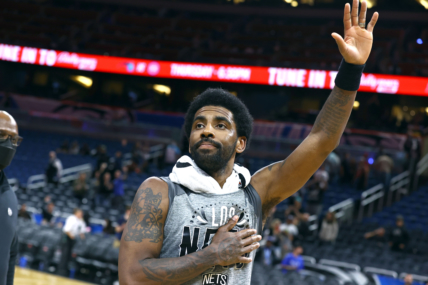 The good news for Houston is that it is projected to have a league-high $34.56 million in cap space next summer. In addition to potentially signing Irving, it also boasts the young talent and draft picks to potentially entice Philadelphia in a sign-and-trade should Harden opt out of his current contract and become a free agent.

As for Kyrie Irving, he’s in the final year of a four-year, $136.49 million contract after declining his option for the 2023-24 campaign.