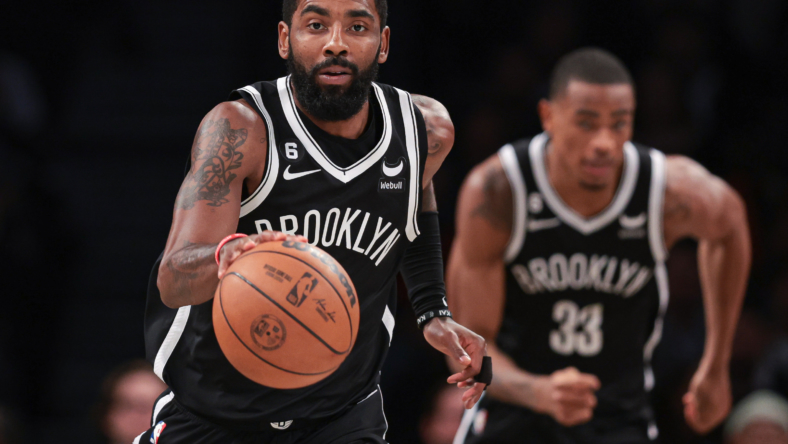 Star guard Kyrie Irving might have played his final game as a member of the Brooklyn Nets. With both the player and the organization facing a ton of criticism for Irving sharing a video with antisemitic views on social media last week, a firestorm has hit the duo.

Brooklyn is now taking action. In a press release Thursday evening, the Nets announced that they have suspended Irving indefinitely. Said release comes after Irving refused to apologize for sharing said video.

“Over the last several days, we have made repeated attempts to work with Kyrie Irving to help him understand the harm and danger of his words and actions, which began with him publicizing a film containing deeply disturbing antisemitic hate. We believed that taking the path of education in this challenging situation would be the right one and thought we had made progress with our joint commitment to eradicating hate and intolerance.

We were dismayed today, when given an opportunity in a media session, that Kyrie refused to unequivocally say he has no antisemitic beliefs, nor acknowledge specific hateful material in the film. This was not the first time he had the opportunity — but failed — to clarify.”

The Nets then noted that Irving will be suspended for at minimum five games. However, they left open the possibility of a longer suspension should the All-Star guard fail to meet a series of “objective remedial measures that address the harmful impact of his conduct.”

Irving spoke with the media earlier on Thursday. However, said session stopped short of him apologizing outright. Since then, NBA Commissioner Adam Silver indicated that he plans to meet with Irving in the coming days to address his actions. Irving’s suspension is without pay.

Related: Why the Brooklyn Nets should move on from Kyrie Irving

Kyrie Irving suspension and what it means

In their statement, the Nets indicated that Irving “is currently unfit to be associated with the Brooklyn Nets.”

These are some strong words from the organization. They also come at a time when Irving himself has seemingly refused to take responsibility for adding to the hate being felt by the Jewish population based on antisemitic rhetoric in today’s society.

“Again, I am going to repeat, I do not know how the label becomes justified because you guys ask me the same questions over and over again. But this is not going to turn into a spin around cycle of questions upon questions.”

Kyrie Irving on whether he is antisemitic

There’s now a good chance that this relationship can’t be salvaged. Irving is slated to become a free agent after the 2022-23 season. Other teams have no real interest in trading for him. In one report, he’s seen as “too radioactive” for other organizations.