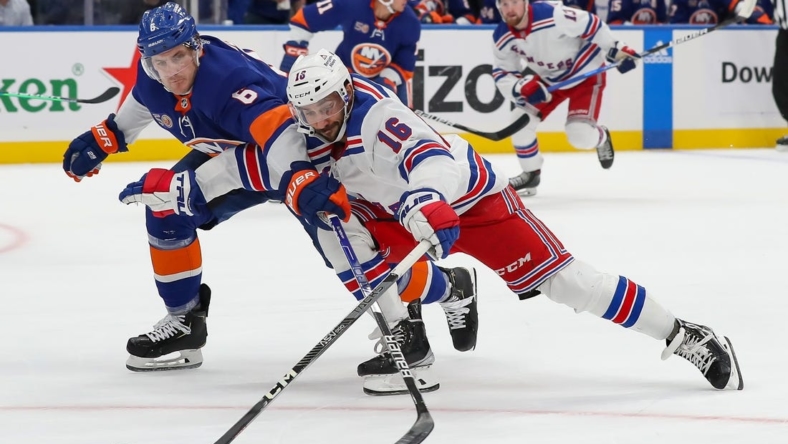 Josh Bailey scored in the third period for the Islanders, who snapped a three-game losing streak. The goals were the first of the season for both Palmieri and Bailey. Adam Pelech and Jean-Gabriel Pageau contributed two assists apiece.

Sorokin, who improved to 3-1-0 against the Rangers, recorded his 11th career shutout and first since beating the Montreal Canadiens on April 15.

The Rangers outshot the Islanders 17-8 during a first period in which the visitors killed a pair of penalties. The Islanders had a pair of solid scoring chances during the latter power play — generated when K’Andre Miller was whistled for tripping — but Anders Lee couldn’t jam home the rebound of a shot by Brock Nelson, and Mathew Barzal missed on a shot in the crease.

The Rangers produced their best chances later in the period, when Sorokin made a stick save on a point-blank shot by Kaapo Kakko after the right winger threaded his way through a trio of players in the Islanders’ zone. Sorokin also turned back Jimmy Vesey after the latter darted across the crease and tried to bury a shot into the corner of the net.

The Islanders finally broke through and took their first lead in eight days 8:44 into the second period. Palmieri briefly lost control of the puck near the left faceoff circle, but Pageau recovered it and tapped a pass to Palmieri, who beat Halak beyond his glove from the edge of the right faceoff circle.

Bailey, playing in his 999th game with the Islanders, doubled the lead 5:37 into the third when he skated in front of Halak, jumped and got a stick on Pelech’s shot.

Sorokin maintained the shutout with 9:51 left when he stopped Barclay Goodrow’s backhander.

Palmieri iced the victory with 4:38 left when his off-balance shot — fired while he jostled for position in the slot with Miller — fluttered over Halak’s head.