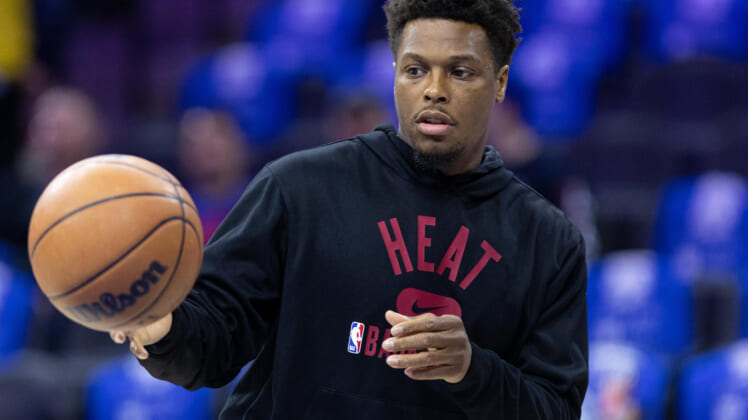 Having played in just five games this postseason due to a nagging hamstring injury, Kyle Lowry was questionable heading into the Miami Heat’s Game 1 outing against the Boston Celtics in the Eastern Conference Finals.

We now have an update on Lowry’s status courtesy of the Heat themselves. One day before they are set to host Boston, the Heat have ruled the six-time All-Star out for Game 1.

This really can’t be seen as too much of a surprise. Lowry, 36, has missed six of Miami’s past eight games due to the hamstring injury he initially suffered back in Game 3 of the first round against the Atlanta Hawks.

While Lowry did return for Game 4 and 5 against the Philadelphia 76ers in the Eastern Conference Semifinals, he re-injured the hamstring and has not seen the court since.

Miami Heat are undefeated in the playoffs without Kyle Lowry

This is not a knock on Lowry. Rather, it’s just stating the facts. Miami boasts a 6- 0 record with Lowry sidelined in the postseason. The team has outscored its opponents by a combined margin of 101 in those six games. Miami is a mere 2-3 when Lowry plays, outscoring its opponents by five points during that span.

As you can see, the aging Lowry has struggled big time when he’s been on the court in the playoffs. It’s obvious he has not been anywhere near 100%.

In his first regular season with the Heat, Lowry averaged 13.4 points, 4.5 rebounds and 7.5 assists on 44% shooting. He’s a shell of his former self right now.

Gabe Vincent has started every game at the point that Lowry has missed in the playoffs. He’s averaging 7.5 points and 3.5 assists.

Having just returned from injury himself, former All-Star Victor Oladipo has seen increased usage with Lowry sidelined. After being inactive for the first three games of the playoffs, Oladipo is averaging 11.4 points and 3.8 rebounds on 42% shooting in the eight outings since.

These two players will help fill the void left by Kyle Lowry being out for at least Game 1. However, we will see both Jimmy Butler and Tyler Herro handle the point during the Eastern Conference Finals, too.