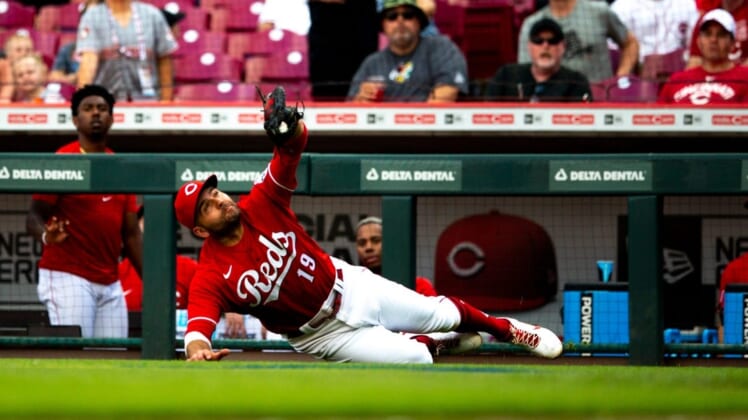 Kyle Farmer connected for his third homer in three games and Aristides Aquino threw out the potential tying run at the plate to end the game as the Cincinnati Reds edged the visiting San Francisco Giants 3-2 on Saturday.

With runners on first and second, Wilmer Flores singled to right. Aquino threw a one-hop strike to catcher Tyler Stephenson, who easily tagged pinch-runner Joey Bart for the final out of the game.

It was the fifth outfield assist for Aquino, tying him for third-most in the majors this season.

Four relievers combined to allow just one run over the final four innings for the Reds, who won their season-best fourth straight.

The Giants outhit the Reds 12-5 but went just 3-for-16 with runners in scoring position in losing their ninth game in 13 tries. The Giants stranded runners on first and second in the eighth and ninth innings against reliever Tony Santillan, who recorded his third save.

Farmer continued his torrid hitting of late when he connected off former roommate Alex Wood for a three-run homer in the first inning. The homer extended his hitting streak to a team-best eight games and gave him six hits in his last eight at-bats. Farmer and Wood were teammates with the Los Angeles Dodgers.

Wood (3-4) settled down to retire 15 of 16 batters, including 12 in a row before Joey Votto’s two-out single chased the lefty from the game. Wood was charged with three runs on four hits, striking out six and walking one in 5 2/3 innings.

Reds starter Vladimir Gutierrez (1-6) had his most effective and longest outing of the season, allowing only one run on six hits, striking out four and walking one in five innings. Gutierrez worked out of a bases-loaded, one-out jam in the second.

Evan Longoria’s third homer of the season, a blast to the second deck in left of reliever Luis Cessa, brought the Giants to within a run, 3-2, in the sixth.

The Giants had another threat in the eighth against lefty reliever Ross Detweiler, putting runners on first and second. Votto battled the shadows to make a key sliding catch in foul territory on a Longoria pop fly. Santillan retired pinch-hitter Thairo Estrada on a grounder to short to end the threat.