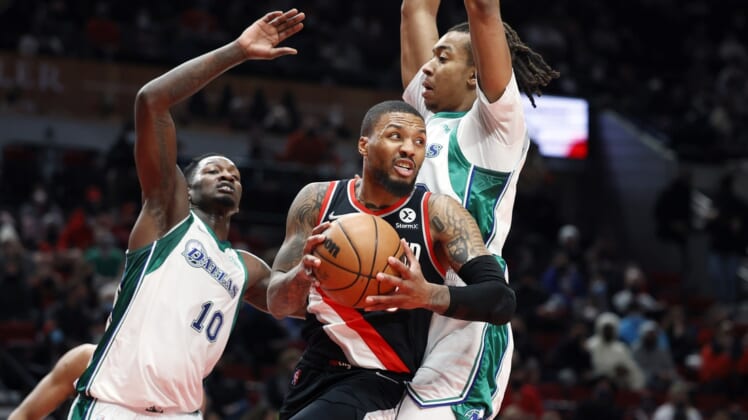 Kristaps Porzingis exploded for a season-best 34 points Monday night and the Dallas Mavericks, playing without Luka Doncic, gradually pulled away from the host Portland Trail Blazers for a 132-117 triumph.

Dwight Powell chipped in with 22 points for the Mavericks, who ended a two-game losing streak by earning just their seventh win in the past 20 games.

In the first of three scheduled meetings this season, Dallas never trailed after Powell drilled a 3-pointer for a 5-3 lead.

The Mavericks went on to lead by as many as nine in the first period, 19 in the second and 26 in the third before emptying the bench.

Porzingis’ scoring output was his highest since going for 36 points in a win over the New Orleans Pelicans in February. His career high is 40, set in November 2017 against the Indiana Pacers while he was with the New York Knicks.

Brandon Knight came off the bench to score 18 points for the Mavericks, while Dorian Finney-Smith and Jalen Brunson added 14 apiece.

Porzingis had a team-high-tying nine rebounds while Josh Green finished with career highs in points (nine) and assists (a game-high 10).

Half of Lillard’s total came at the free-throw line, where the guard went 13-for-14. Lillard shot just 5-for-15 from the field as part of Portland’s 42.7 percent night.

Nassir Little had 20 points, Norman Powell 15, Larry Nance Jr. 12 and Anfernee Simons 11 for the Trail Blazers, who lost their second straight and fell for the 12th time in their past 15 outings.

Little, who had three blocks, also found time for a game-high 10 rebounds to complete his third career double-double.