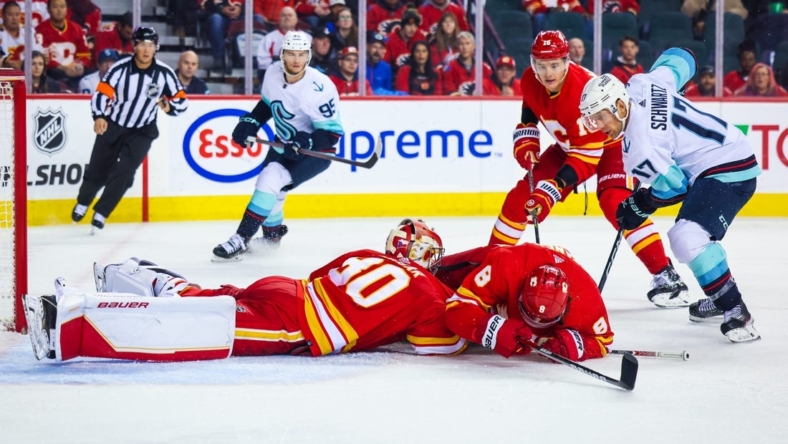 Beniers scored off a pass from Jordan Eberle on a three-on-one breakaway, lifting the puck over sprawling Calgary goaltender Dan Vladar, to snap a 4-4 tie at 13:26 of the final period.

Kraken goalie Joey Daccord, making his first appearance of the season with Philipp Grubauer out with a lower-body injury and Martin Jones away from the team for personal reasons, made 36 saves.

Tyler Toffoli had a goal and an assist and Nikita Zadorov, Nazem Kadri and Trevor Lewis also tallied for the Flames. Elias Lindholm had two assists, and Vladar stopped 21 of 26 shots.

The Kraken won for the third time in four games while the Flames dropped their second straight contest.

The score was tied 2-2 entering the third period before the Flames scored twice in a 17-second span to take the lead.

Toffoli got the go-ahead goal, beating Daccord with a snap shot from between the hashmarks at 1:34 just after Lindholm won a faceoff.

Lewis subsequently fired a wrister from between the circles to give the Flames a two-goal cushion.

The Kraken rallied behind their special teams. Sprong scored a power-play goal at 8:31 and Gourde tied it on a short-handed breakaway at 11:26 after he stole the puck from Kadri at the Flames’ blue line.

Seattle opened the scoring at 14:58 of the first period on Soucy’s wrister from just outside the left faceoff dot.

The Flames tied the score 6:28 of the second. Toffoli carried the puck down the right wing and fired a pass across the top of the crease to Zadorov for a one-timer.

Calgary took the lead at 8:14 of the second. Kadri skated down the right wing and cut toward the net. He momentarily lost control of the puck just before he got to the crease, but it bounced right back to him and he hammered it into the open net.

Kraken coach Dave Hakstol challenged the call, apparently claiming Kadri had clipped Daccord’s skate as he moved across the crease, but the goal stood after a video review.

Seattle tied it at 13:10 of the second as Geekie converted a two-on-one break with Jamie Oleksiak.