Korey Lee erupts with three-hit game as Astros down Athletics 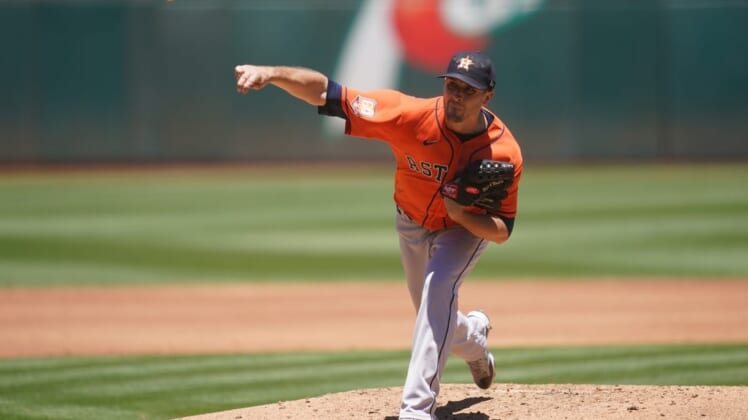 Named a first-time All-Star reserve in an announcement made during the game, Kyle Tucker contributed a home run to Houston’s fifth victory over Oakland in six head-to-heads this season.

A product of the nearby University of California, Lee singled to left field in the fifth inning for his first big-league hit after starting 0-for-5 with a walk. The hit scored Jake Meyers, who had doubled, to give the Astros a 2-0 lead.

A first-round pick in 2019 who was promoted to the majors for the first time on July 1, Lee added to his big day with a two-run double in a three-run seventh. Jeremy Pena made it 5-0 with a sacrifice fly.

Lee also singled leading off the ninth to finish 3-for-4.

Making his second start since returning from a strained left foot/ankle, Odorizzi (4-2) limited the A’s to four hits in seven innings. He walked one and struck out seven.

Oakland ended a combined shutout bid when Vimael Machin belted his first big-league home run off reliever Phil Maton with two outs in the eighth. The RBI was just the second of Machin’s career in 47 major league games over three seasons.

Alex Bregman singled in Jose Altuve in the first inning to open the scoring and set the stage for the Astros’ 11th win in their last 13 games.

Meyers scored twice for Houston, who also had Framber Valdez, Justin Verlander and Yordan Alvarez added to the All-Star team on Sunday. Altuve had been voted a starter in an announcement made Friday.

Machin went 2-for-4 for the A’s, whose Paul Blackburn was named Sunday as the team’s lone representative in the July 19 All-Star showcase.