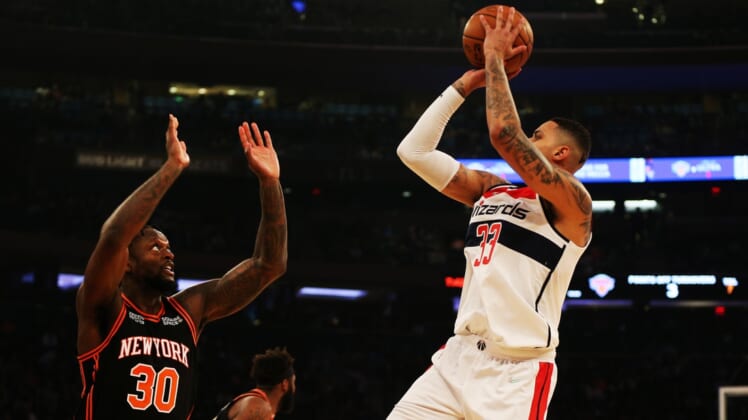 Julius Randle and Mitchell Robinson each had double-doubles Friday night for the host New York Knicks, who moved into 11th place in the Eastern Conference by staving off a furious late rally from the Washington Wizards and escaping with a 100-97 win.

With their second straight win, the Knicks (30-40) moved a half-game ahead of the Wizards (29-40), who have lost six straight. New York is five games behind the Charlotte Hornets and Atlanta Hawks, who are tied for ninth place and the final two spots in the play-in tournament following the Hawks’ 120-105 win over the Memphis Grizzlies on Friday night.

Randle had 18 points — tying him with RJ Barrett for the team high — and 17 rebounds. Robinson finished with 15 points and 12 rebounds as he became the only player in the NBA this season with 10 offensive rebounds in two games. He also had 10 offensive boards against the Utah Jazz on Feb. 7.

Evan Fournier and Immanuel Quickley each had 15 points for the Knicks, while Alec Burks added 12 points.

Kyle Kuzma finished with 18 points for the Wizards after hitting three 3-pointers in the final two minutes. Kristaps Porzingis also had 18 points, and he grabbed 11 rebounds. Corey Kispert (14 points), Raul Neto (11 points) and Rui Hachimura (11 points) all got into double figures.

The Knicks went ahead for good at 46-45 on a free throw by Burks with 3:47 left in the second quarter and appeared to be capping an easy win when Barrett hit a 3-pointer to give New York its biggest lead at 96-81 with four minutes left.

However, the Wizards stormed back. They scored on their next six possessions, a stretch that ended with Kuzma’s three treys, the last of which pulled Washington within 98-97 with 42.4 seconds remaining.

Barrett missed a short turnaround jumper before Kuzma’s streak ended when he missed a 27-footer. Barrett grabbed the rebound, was fouled and hit both free throws for New York, which was 14-of-14 from the free throw line in the fourth.

The Wizards called their final timeout, and Barrett draped Kentavious Caldwell-Pope as he took the inbounds pass from Neto. Caldwell-Pope dribbled twice, and with Barrett’s arm in his face, lofted an off-balance 3-point attempt that didn’t hit the rim just before time expired.