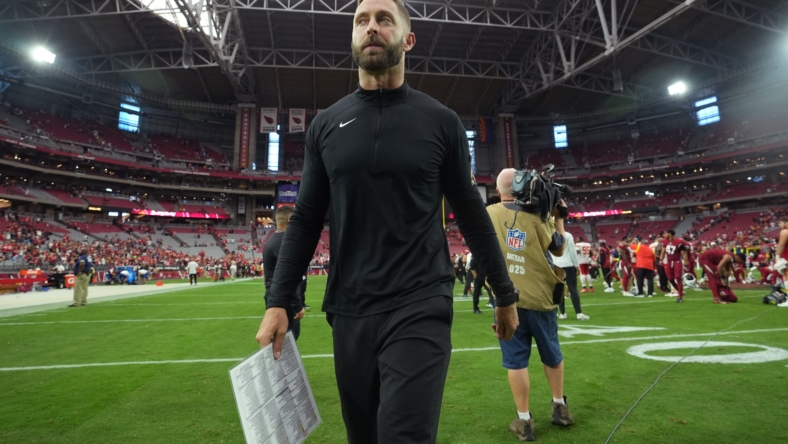 By definition, the Arizona Cardinals have been an average team since Kliff Kingsbury took over as their head coach back in 2019. They head into Week 4 against the Carolina Panthers at 1-2 this season and boasting a 25-26-1 record under Kingsbury.

That’s why it was somewhat surprising Arizona’s brass opted to give Kingsbury and general manager Steve Keim matching extensions through the 2027 season back in March. This team has struggled winning games down the stretch throughout Kingsbury’s tenure in the desert, issues that followed him from the Texas Tech Red Raiders in college to the professional ranks.

Jason La Canfora of the Washington Post spoke to a few rival executives and scouts about Kingsbury and his reputation around the league. While the individuals had to speak on a condition of anonymity because of organizational policies, the opinions of Kingsbury were not great.

“We were shocked that they extended the coach. It’s not a sophisticated scheme. He’s not considered a great play-caller. Every year the production drops as the season goes on.”

High-ranking NFC official on Kliff Kingsbury and the Arizona Cardinals

You don’t have to look beyond the numbers to draw this very same conclusion. Last season saw Arizona start out by winning each of its first seven games. It lost six of 10 to conclude the regular-season schedule before being blown out by the division-rival Los Angeles Rams in the NFC Wild Card Playoffs.

As we noted above, this was a continuation of issues for Kingsbury-led teams dating back to his days with Texas Tech. Arizona lost five of its final seven games in 2020 after starting 6-3. Back in 2019, the team dropped seven of its final nine games. And in Kingsbury’s rookie campaign of 2019, the Cards lost their final four games.

During his six-year run with Texas Tech from 2013-18, Kingsbury boasted an ugly 35-40 record as a head coach despite having Patrick Mahomes star under center for three of those seasons. The team was 7-19 from November on during that six-year span.

“There is an arrogance to their scheme on both sides of the ball. It’s like they just say, ‘We’re going to do what we planned to do, no matter what.’ But it’s not working,” rival scout on Kliff Kingsbury.

If this is what those going up against Kingsbury and the Arizona Cardinals are seeing first-hand, it’s certainly not a great thing. And in reality, the Cards’ unwillingness to adjust is one of the primary reasons they continue to fade down the stretch.

This season, things have been different in that Arizona has not had success out of the gate. If it weren’t for a complete meltdown by the Las Vegas Raiders back in Week 2, the Cardinals would currently find themselves as the only winless team in the NFL. They were blown out by the Kansas City Chiefs back in Week 1 and were only able to put up 12 points in a defeat at the hands of the Los Angeles Rams this past Sunday.

Heading into Week 4 against Carolina, questions will continue to surface about whether extending Kingsbury and Keim made sense in the grand scheme of things. The two are connected at the hip for the next half-decade in the desert. Meanwhile, quarterback Kyler Murray just landed a five-year, $230.5 million contract extension.

It seems as if the trio has topped out in the desert. Another ugly showing in a loss to Carolina this coming Sunday would magnify that further, leading to rumbles about an organization-wide shift in philosophy.