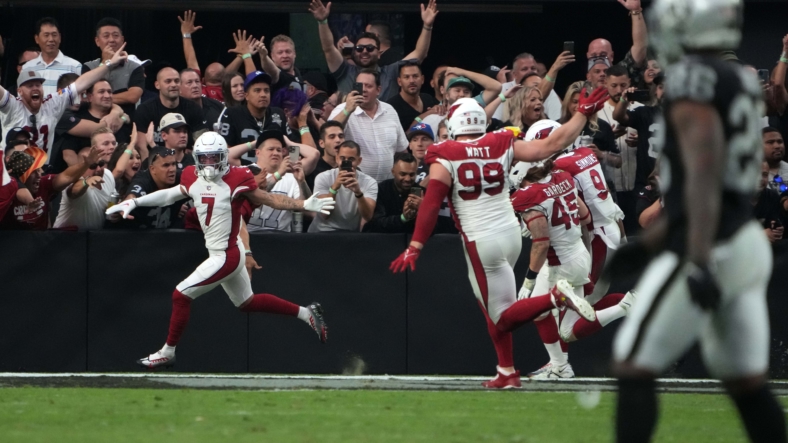 Trailing 23-7 midway through the fourth quarter against the Las Vegas Raiders, the Arizona Cardinals stared down an 0-2 start and questions about the team’s ability to contend in 2022. With everything at stake on the road, quarterback Kyler Murray and cornerback Byron Murphy Jr. capped off a wild NFL Week 2 with an unbelievable comeback.

Arizona got the football back with 12 minutes left in the fourth quarter facing a 23-7 deficit. On a day when the offense couldn’t get anything going and the defense failed to get crucial stops, even making it a competitive game seemed unlikely.

Murray often found himself behind an offensive line that couldn’t contain the Raiders’ pass rush. However, one of the highest-paid quarterbacks in the NFL earned his contract extension on Sunday with a remarkable fourth-quarter performance.

He led the Cardinals on a nine-play, 54-yard scoring drive that was capped off with a touchdown followed by Murray evading a seemingly endless number of defenders before scrambling for the two-point conversion.

After the Cardinals’ defense forced a stop, Murray got the football back with under five minutes to play at his own 27-yard line. The Pro Bowl quarterback led the longest drive of the 2022 NFL season, spanning 18 plays and eating up the entire clock.

Las Vegas allowed Arizona to reach the 6-yard line with under 40 seconds remaining. Just when it seemed like the Raiders landed the game-deciding stop on fourth down, a penalty for defensive holding provided the Cardinals with a fresh set of downs at the 3-yard line. On the final play of regulation, Murray took it in himself as the clock expired to make it a 23-21 game. He then hit A.J. Green in the back of the end zone for the game-tying two-point conversion.

Arizona won the toss in overtime and started with the ball. However, its drive stalled at the Raiders’ 37-yard line on a failed connection to Marquise Brown. Las Vegas got the football back, finding itself in a position to survive after a fourth-quarter collapse.

On the second drive in Cardinals’ territory, quarterback Derek Carr hit Hunter Renfrow for a short gain. After Renfrow slipped out of the first tackle, Isaiah Simmons came flying in and jarred the ball loose just shy of field goal range for Daniel Carlson.

After two players failed to fall on top of it, cornerback Byron Murphy Jr. scooped up the football and took it the distance for the game-winning touchdown.

Sunday will certainly go down as one of the most memorable days of football in recent memory. It started with Tua Tagovailoa leading a dramatic fourth-quarter comeback over the Baltimore Ravens and was followed moments later by Joe Flacco and the New York Jets stunning the Cleveland Browns. Now, the Arizona Cardinals have added onto it with a victory that could turn around their season and will boost Murray’s reputation as one of the best, young quarterbacks in the NFL.