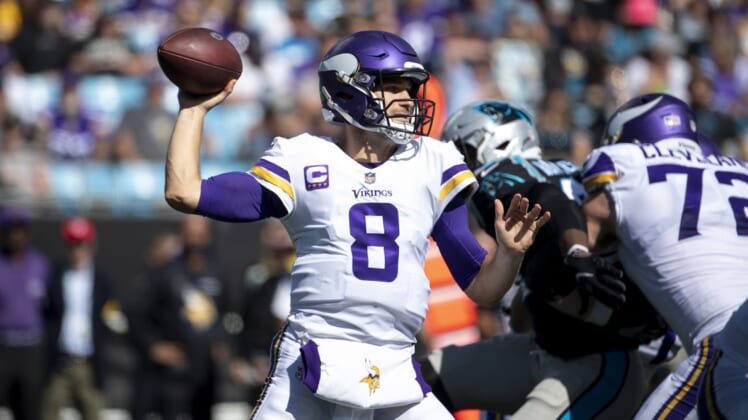 Kirk Cousins threw 27 yards to K.J. Osborn on the first possession of overtime as the visiting Minnesota Vikings defeated the Carolina Panthers 34-28 in a mistake-filled game Sunday afternoon in Charlotte, N.C.

Cousins threw three touchdown passes and Dalvin Cook returned to action by rushing for 140 yards and a touchdown on 29 carries. Cousins went 33-for-48 for 373 yards through the air.

Panthers quarterback Sam Darnold was 17-for-41 for 207 yards, one touchdown and one interception.

The Vikings scored two touchdowns in a two-minute span of the third quarter for a 25-17 lead.

The first of those came on Cook’s 16-yard touchdown run. Four plays after a Carolina fumble, the Vikings converted on Cousins’ third-and-goal pass of 5 yards to Adam Thielen, who made a diving catch on the side of the end zone.

On Minnesota’s next possession, it drove 63 yards for Greg Joseph’s 38-yard field goal with 10:19 remaining. A missed field goal from 50 yards three minutes left the lead at 28-17.

The Panthers ended up with Zane Gonzalez’s 23-yard field goal at the 4:44 mark.

Carolina got the ball back at its own 4-yard line with 2:18 left.

The Panthers did little on offense, but they were up 17-12 after Frankie Luvu blocked a punt and Kenny Robinson returned the ball 4 yards for a third-quarter touchdown.

Carolina had a total of 68 yards on its first four possessions of the second half. Two of those sequences ended in turnovers.

The Vikings had Cook back after he missed time with an ankle injury. Carolina, though, was again without running back Christian McCaffrey, who has missed three straight games and won’t be eligible to return until November since being placed on injured reserve.

The first points for each team came following turnovers.

The Vikings settled for two field goals — both from 25 yards out by Joseph — in the first quarter. This was despite taking over at the Carolina 22-yard line after Bashaud Breeland intercepted Darnold’s pass on the first snap of the game.

The Vikings reached the end zone on a nine-play drive, with Cousins connecting with Chris Herndon for a 2-yard scoring play.

Gonzalez booted a 47-yard field goal for Carolina later in the second quarter.