Kings get balanced scoring in victory over Cavaliers 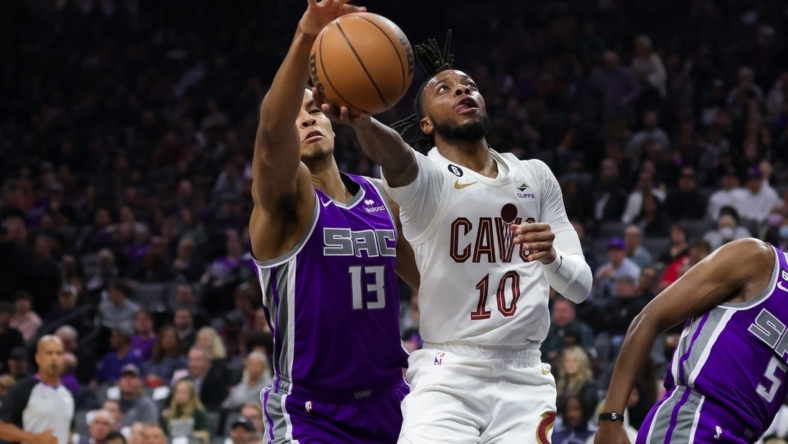 Kevin Huerter hit two clutch hoops down the stretch Wednesday night and the Sacramento Kings avoided more last-second drama by pulling away late for a 127-120 victory over the visiting Cleveland Cavaliers.

Seven Kings scored between 14 and 21 points, with Domantas Sabonis leading the way with 21, helping Sacramento win for the fourth time in its last six games and end a streak of three consecutive controversial three-point decisions.

Donovan Mitchell poured in a game-high 38 points for the Cavaliers, who lost for the second time in three games on their ongoing tour of California. The trip ends Friday in San Francisco against Golden State.

After an Evan Mobley offensive foul, Sabonis scored on a layup for a four-point advantage with just 1:51 left.

Huerter then buried a clinching 3-pointer 30 seconds later, following a Darius Garland free throw and doubling a three-point margin to a 124-118 lead.

Huerter finished with 14 points, joining Sabonis, Harrison Barnes (20 with a team-high nine rebounds), Trey Lyles (16), De’Aaron Fox (15 with a game-high-tying eight assists), Malik Monk (14) and Keegan Murray (14) in double figures for the Kings. Lyles and Murray had four 3-pointers apiece, helping the hosts outscore the Cavaliers 51-33 from beyond the arc.

Mitchell shot 16-for-28 overall and accounted for six of Cleveland’s 11 made 3-pointers on his big night.

Caris LeVert had a game-high 10 rebounds as part of a double-double with 21 points for the Cavaliers, while Jarrett Allen added 20 points and Mobley 16.

The Cavaliers lost despite outshooting the hosts 53.5 percent to 52.6 percent.

Seeking just their second home win in five dates, the Kings dominated the game for the better part of three quarters, leading by as many as 12 in the first period, 14 in the second and 15 in the third.

But Cleveland rallied within 97-93 by the end of the third quarter and drew even at 99-all on a Mitchell layup 2:01 into the final period, setting up Huerter’s late heroics.