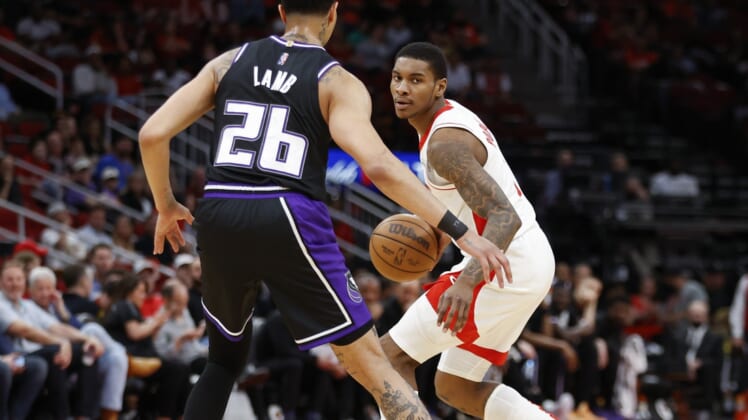 Davion Mitchell, Damian Jones and Trey Lyles each scored 24 points as the Sacramento Kings fended off the host Houston Rockets 121-118 on Wednesday night.

Mitchell added five rebounds and eight assists while Jones chipped in nine rebounds and five assists. Lyles grabbed seven boards and finished 10 of 12 from the free-throw line, including a pair with 9.4 seconds left that answered a 3-pointer from Rockets rookie guard Jalen Green that cut the margin to one point with 10.5 seconds remaining.

The Rockets (20-57) erased what was a 14-point deficit when Kenyon Martin Jr. sank a 3-pointer for a 108-106 lead with 6:28 remaining. But Mitchell and Jones teamed on consecutive baskets that pushed the Kings back in front by four, and after the Rockets reclaimed the lead at 113-112 at the 2:15 mark, Jones recorded a tip-in and Mitchell a pair of free throws that kept Sacramento in control.

After trailing by as many as 14 points early in the second quarter, the Kings (28-49) seized a 95-81 lead late in the third when Donte DiVincenzo nailed a 3-pointer following a Mitchell layup that provided Sacramento its first double-digit lead with 4:56 left in the period. But the pendulum swung back to Houston with haste as the Rockets closed the frame on a 12-2 run keyed by Porter, who scored four points and assisted on dunks from Fernando and Martin during the rally.

Green and Porter were scorching early, combining for 24 points in the Rockets’ 39-point first quarter. They teamed to shoot 5-for-8 from behind the arc with Porter adding four rebounds and four assists as Houston led by as many as 13 points in the period.

Houston held a 45-31 lead on a pair of Martin free throws with 10:01 left in the half and was up nine following a Fernando three-point play at the 5:45 mark of the second before the Kings rallied.