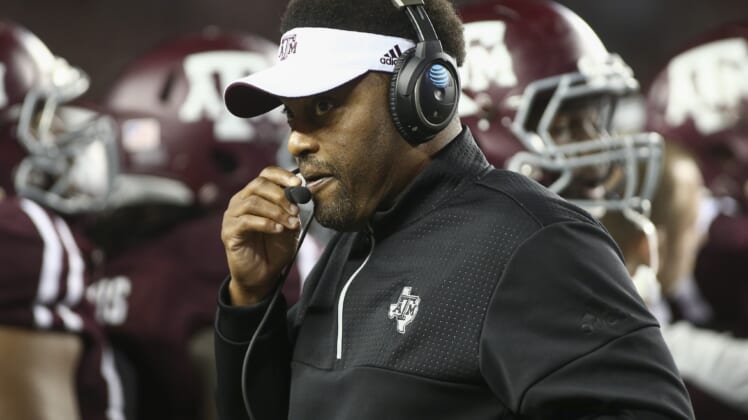 Texas A&M coach Kevin Sumlin is very much on the hot seat. This is not a rumor, either. School athletic director Scott Woodward publicly said as much on Tuesday.

Texas A&M AD Scott Woodward didn't mince words on Finebaum today. "Coach knows he has to win and he has to win this year." #12thMan pic.twitter.com/Qopj1oV1rB

“Last year was extremely disappointing. We were as highly ranked as four and got up there and played very well in hard, competitive games, and fell off, like we’ve been doing. We were very disappointed. Very disappointed as a program. Both coach and I. We just want to make darn sure that we get it right. We’ve had a heck of a spring. Recruiting continues to go well. But coach knows he has to win and he has to win this year. We have to do better than we’ve done in the past.”

The Aggies have not progressed well during Sumlin’s tenure. In his first year (2012), Texas A&M went 11-2 and finished the season by crushing Oklahoma State in the Cotton Bowl Classic. The following year, Sumlin led his team to a 9-4 mark.

Since then, the Aggies have had three 8-5 seasons. The 8-5 mark in 2016 came despite a 6-0 start to the year. After that, the only wins came against New Mexico State and University of Texas at San Antonio.

So, it would certainly be difficult for anyone to make the case that the A&M football team has progressed in Sumlin’s five-year tenure. As such, Year 6 being a make or break season only makes sense.