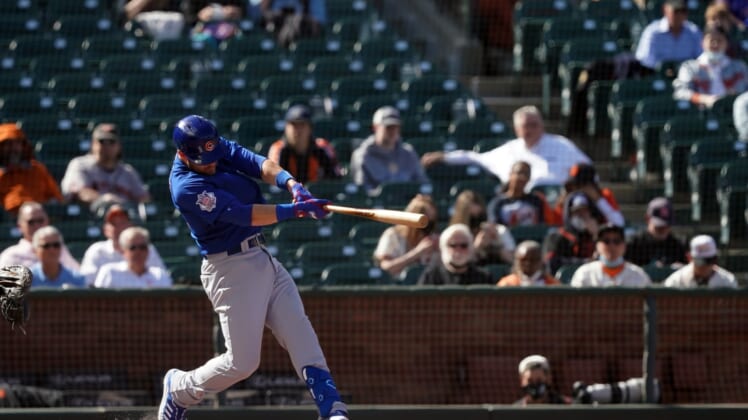 Brandon Crawford had an RBI double among his two hits to help San Francisco win its third straight game, all against the Giants to start the four-game series. Chadwick Tromp and LaMonte Wade Jr. each had an RBI single to propel the Giants to their ninth victory in their last 11 games overall.

San Francisco wore the 11 Pride colors in its logo on game caps along with a patch on the right sleeve of its uniform.

Patrick Wisdom launched a two-run homer in the second inning for the Cubs, who won 14 of their previous 17 games before entering this series. Joc Pederson exited the game prior to the Cubs taking the field in the fifth inning with lower back tightness.

Gausman (7-0) did not appear to be hampered after leaving his last start against the Los Angeles Dodgers with tightness in his left hip. The National League Pitcher of the Month for May overcame Wisdom’s blast to allow just two runs on as many hits without walking a batter.

Jake McGee struck out two batters in the eighth inning to bridge the gap to Tyler Rogers, who overcame two errors in the ninth to notch his eighth save of the season.

Rafael Ortega reached on an error by second baseman Mauricio Dubon, and Kris Bryant scored on an error by third baseman Evan Longoria, but Rogers struck out Willson Contreras and induced Jason Heyward to ground out to end the game.

Gausman’s lone blemish came in the second inning after Wisdom deposited a 1-1 fastball over the wall in center field. The homer was Wisdom’s fifth homer of the season and fourth in the last six games.

San Francisco halved the deficit with two outs in the third inning after Dickerson sent an 0-1 sinker from Kohl Stewart (1-1) over the wall in left field. The homer was Dickerson’s sixth of the season and second in as many games.

Tromp’s single to right-center field plated Steven Duggar to forge a tie in the fourth inning. The tie didn’t last long, as Wade singled to shallow left field to plate Jason Vosler to give the Giants a 3-2 lead.

That spelled the end of the evening for Stewart, who yielded three runs on seven hits in 3 2/3 innings.

Crawford doubled the advantage for the Giants with an RBI double in the fifth inning.