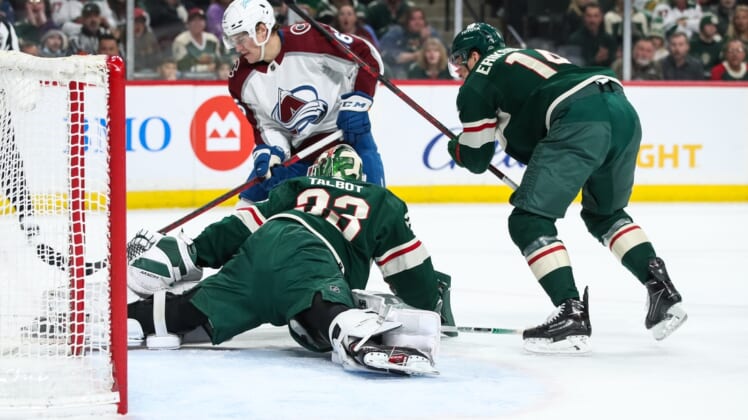 Kevin Fiala notched a power-play goal 15 seconds into overtime to lift the Minnesota Wild to a 3-2 win over the Colorado Avalanche on Sunday evening in St. Paul, Minn.

Kirill Kaprizov and Ryan Hartman also scored for Minnesota, which won its sixth game in a row. Mats Zuccarello tallied three assists for the Wild.

Nazem Kadri and Mikko Rantanen scored one goal apiece for Colorado. The Avalanche earned at least one point for the eighth time in their past 11 games.

Fiala scored a one-timer from the right circle on a perfect feed from Zuccarello.

Cam Talbot earned the victory in net for the Wild after stopping 40 of 42 shots.

The Wild grabbed a 1-0 advantage on the power play with 1:53 remaining in the second period. Hartman slipped a pass from behind the net to Kaprizov, who quickly lifted a shot above Kuemper’s left shoulder for his team-leading 36th goal of the season.

Colorado defenseman Devon Toews cross-checked Kaprizov into the back of the Wild net moments after the goal. Kaprizov’s teammates jumped to his defense, pinning Toews against the boards while looking toward the officials for a penalty call that never arrived.

The Avalanche evened the score at 1-1 at 6:21 of the third period. After Colorado won a faceoff in its offensive zone, Kadri ripped a rising shot from the top of the left circle for his 26th goal.

Three minutes and 42 seconds later, the Avalanche pulled ahead 2-1 on the power play. Rantanen scored only two seconds into the man advantage for his 33rd goal.

The Wild responded quickly to even the score at 2-2. Hartman notched his 27th goal from the left side of the crease with 5:26 to play in the third period.

The Wild beat Colorado for the first time in three games this season. Colorado cruised to a 4-1 win at home Oct. 30 and held on for a 4-3 win in the shootout round at home Jan. 17.