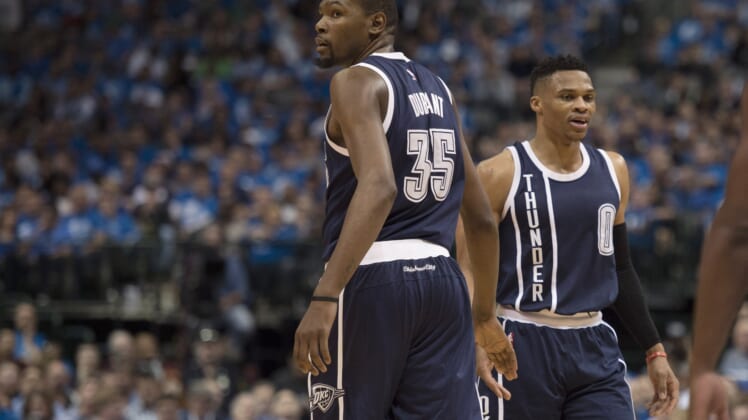 To say that there is some bad blood between former Oklahoma City Thunder teammates Kevin Durant and Russell Westbrook would be an understatement.

Shortly after Westbrook signed a massive extension to remain with the Thunder through the 2017-18 season, Durant indicated that he’s not necessarily ready to congratulate his former teammate.

In Rio, Kevin Durant was asked if he would reach out to Russell Westbrook after his contract extension with Thunder pic.twitter.com/Yiurrl0bl3

Durant signed with the conference-rival Golden State Warriors back in early July, leaving a bad taste in the mouth of Westbrook.

It was something that came to the forefront just recently when Westbrook took a shot at Durant through social media without even saying a word.

The two played together in Oklahoma City for eight seasons, earning a playoff spot six times and making it to the NBA Finals once.

It was seemingly a great relationship up until questions about their ability to reach the height of the NBA together. Once Durant signed with the team that ousted Oklahoma City in the Western Conference Finals last season, it became apparent that bad blood was boiling to the surface.

It will most definitely be interesting to see how this all turns out. Durant and Westbrook will face off multiple times during the 2016-17 season and could potentially square off on the playoffs.

If there really is some bad blood here, we will know soon enough.