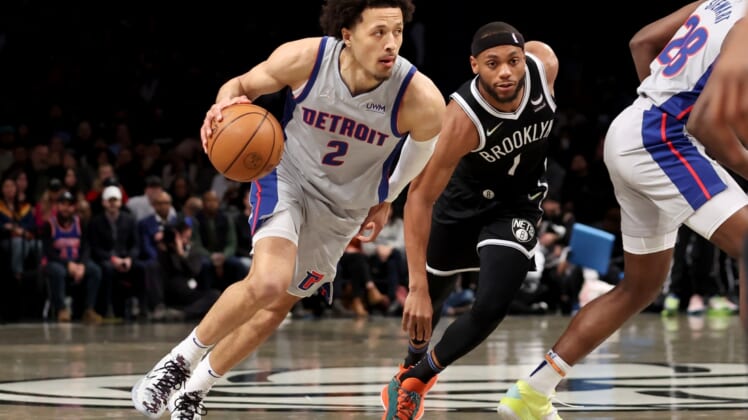 Kevin Durant collected 41 points and 11 rebounds as the Brooklyn Nets rallied in the second half and recorded a 130-123 victory over the Detroit Pistons Tuesday night in New York.

The Nets (40-36) won for the eighth time in 11 games after trailing by 12 in the first half. Brooklyn moved one game ahead of the ninth-place Charlotte Hornets in the race for a play-in berth in the Eastern Conference.

Durant scored 16 points in the third quarter and hit the tiebreaking 11-footer that gave the Nets a 110-108 lead with 4:54 remaining and helped Brooklyn outscore Detroit 22-15 to finish the game.

Kyrie Irving added 24 in his second home game of the season after the unvaccinated guard was granted an exemption from New York City’s private employer mandate last week. He made 7 of 18 shots, including a 19-footer that put Brooklyn up 126-118 with 90 seconds left.

Rookie Cade Cunningham matched his career high with 34 points as the Pistons (20-56) lost for the ninth time in 11 games. Saddiq Bey and Isaiah Stewart added 15 apiece as Detroit shot 48 percent and hit 16 3-pointers while taking its eighth loss by single digits in its skid.

The Nets regained the lead when Brown’s 3-pointer made it 69-67 with 9:56 left in the third, held an eight-point lead midway through the quarter and took a 96-94 lead into the fourth.