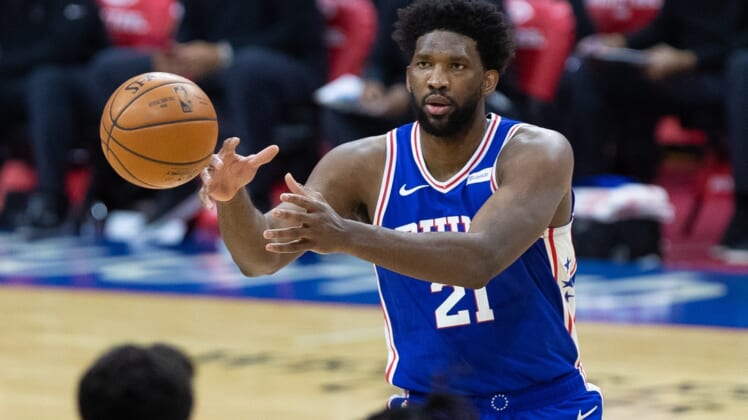 Amid a furor over the NBA’s COVID-19 protocols and uncertainty over the status of Kevin Durant, the Brooklyn Nets will visit the Philadelphia 76ers on Saturday.

According to ESPN, Durant didn’t travel with the Nets to Pennsylvania after a dramatic Friday night in Brooklyn.

In a game that the Nets eventually lost 123-117 to the Toronto Raptors, Durant was held out at the start due to coronavirus contact tracing. Someone he was in contact with earlier in the day had an inconclusive COVID-19 test.

Durant entered the game in the first quarter before being pulled in the third for the rest of the game due to health and safety protocols after his colleague’s test came back positive.

Shortly after being pulled, Durant tweeted, “Free me.”

ESPN reported postgame that Durant might be forced to sit out multiple games.

Nets head coach Steve Nash said, “I don’t believe he’ll come to Philly, but I don’t think they’ve necessarily decided. It’s just a contact-tracing procedure and I think it’s to be determined how much time he’ll have to miss. But we’re just gathering information still at this point.”

Brooklyn guard James Harden said of the in-and-out nature of Durant’s Friday appearance, “The game should’ve been postponed, I feel like. If we’re talking about contact tracing, he was around all of us. … If that was the case, we should’ve postponed the game.”

The Nets fell to 4-2 with Durant, James Harden and Kyrie Irving playing together. Durant scored eight points in 19 minutes, and Harden had 17 points, 12 assists and seven rebounds. Irving scored 15 points, but he took only one shot in the fourth quarter and failed to score.

“It was tough. Give Toronto credit,” Harden said. “They made shots. They played well. But it was frustrating.”

Two frustrated teams will be searching for a much-needed win on Saturday. The Nets still have plenty of talent to win on the road even without Durant.

“As we continue to progress, the beautiful thing is that we’re interchangeable,” Irving said. “So some nights, one of us can have a big night, the other guy can have multiple assists, multiple rebounds, and like I said, we just want to complement each other well as a group.”

The 76ers also will be looking to rebound from a disappointing loss. Philadelphia fell 121-105 on Thursday to the depleted Portland Trail Blazers, who played without a number of key players, including Damian Lillard and CJ McCollum.

Philadelphia competed without Ben Simmons (calf), though coach Doc Rivers didn’t believe the injury was anything serious. Seth Curry also left after 12 minutes of scoreless play because he was ill. Curry has been slow in returning to form after a bout with COVID-19.

“We’re just checking out everything, that could be part of it,” Rivers said of Curry. “He just looks tired and he has looked like that for a while, we just need to be very safe. We are in uncharted waters with all this stuff. He said he didn’t feel great, and that is all we needed to hear (to take him out).”

The Sixers received a major scare in the first quarter when All-Star Joel Embiid left briefly with a hyperextended right knee. Embiid, who has been injury-prone throughout his brief career, returned to lead the Sixers with 37 points.

“I was pretty concerned,” Embiid said. “You never want to mess with any injuries, especially the knee. I kind of felt it when I landed, but I ended up coming back and pushing through it, and as the game went along, I felt good. It wasn’t all the way there, but I was just trying to push. I feel good. Let’s see how I feel (Saturday) when I wake up, but I should be good.”

The Sixers have dropped only two of 12 home games this season.