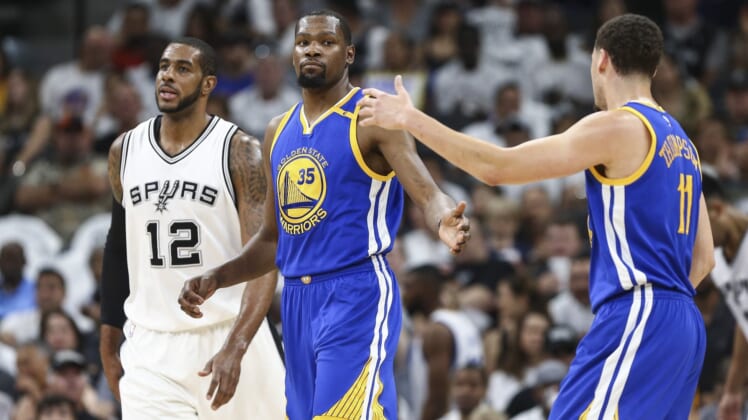 Reigning NBA Finals MVP Kevin Durant is technically slated to hit free agency this coming summer. On the surface, that would seemingly indicate a ton of interest in his services on the open market. The Los Angeles Lakers and their ample amount of cap room come to mind first. But that’s just on the surface.

Durant is intent on re-signing with the Golden State Warriors. This has been known for some time. Only now, Durant has confirmed that he’ll be in Northern California beyond the 2017-18 campaign.

When asked if he was 100 percent going to re-sign with the Warriors, Durant told The Athletic’s Anthony Slater, “yeah, yeah. He then expanded on it a bit.

“I’m sure here soon I’ll want to sign a long-term deal just to feel stable. But I’m enjoying every moment of it, so I’m not trying to look too far down the line,” Durant said. “The money is not important to me. I’ve made so much over my career. But I do know that I want to be here, I love playing here.”

Durant made it clear last offseason that money wasn’t the biggest issue for him. He took far less than the max so that Golden State could re-sign Shaun Livingston, Andre Iguodala and David West. This came at the same time that fellow former MVP Stephen Curry signed what was then the largest contract in NBA history to remain with the Warriors.

The 29-year-old world champion is in the midst of yet another MVP-caliber season for the Warriors. He heads into this weekend’s action averaging 26.0 points, 6.7 rebounds, 5.4 assists and 1.9 blocks per game while shooting at a 52 percent clip from the field.

It’s not yet known what type of deal Durant will sign with the Warriors this summer. He could go for another one-year contract with a player option. Then again, Durant has the ability to receive a super-max deal, which would put him up there with fellow impending free agent LeBron James as the highest-paid player in NBA history.