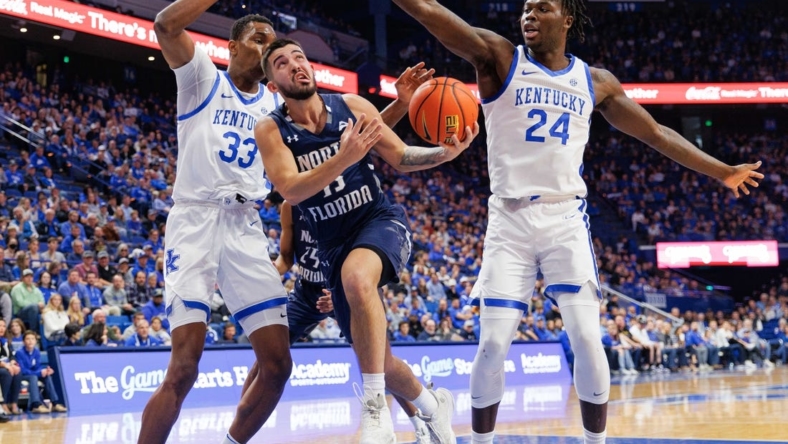 Jacob Toppin collected 20 points and 10 rebounds to lift No. 15 Kentucky to a 96-56 victory over visiting North Florida on Wednesday in Lexington, Ky.

Antonio Reeves scored 20 points in his first start of the season and reigning NCAA Player of the Year Oscar Tshiebwe had 16 points, 15 rebounds, five assists, three steals and two blocks for Kentucky.

Chris Livingston contributed nine points off the bench and Cason Wallace added eight as the Wildcats (4-2) bounced back from a high-profile 88-72 loss to No. 2 Gonzaga on Sunday.

Kentucky, which extended its home winning streak to 23 games, also enjoyed a decided 50-35 edge in rebounds — including an 18-12 advantage on the offensive glass.

Jarius Hicklen scored 17 points and Jonathan Aybar added eight off the bench for the Ospreys (1-4), who have lost two in a row.

Carter Hendricksen, who is a former Lexington Christian Academy standout and Mount Sterling (Ky.) native, finished with seven points after making just 2 of 8 shots from the floor.

The Wildcats built a 14-5 lead following a 9-0 run that was ignited by Wallace’s 3-pointer. Hendricksen made a pair of free throws to trim the deficit to 12 points midway into the first half before Kentucky took over.

Wallace and Sahvir Wheeler each sank another 3-pointer and Reeves converted three times from beyond the arc, with the last coming at the buzzer to give the Wildcats a 54-23 lead at halftime.

Kentucky essentially sealed the win with a fast start to the second half. Toppin drained a pair of jumpers and converted a three-point play to fuel the Wildcats to a 65-28 lead with 16:48 remaining in the game.