Ryder Cup winners Martin Kaymer and Graeme McDowell were named vice captains Wednesday for the European team looking to defend its title in Wisconsin this September.

They joined Robert Karlsson and Luke Donald as assistants to captain Padraig Harrington for the Sept. 24-26 event at Whistling Straits.

“They have both contributed winning points in Ryder Cup history, have been there and done it, and the other players look up to them,” Harrington said in a release. “They both have that aura and responsibility in what they say will have meaning. 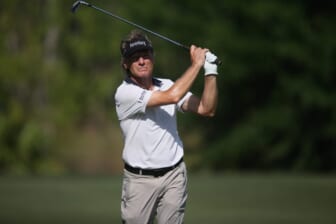 Germany’s Kaymer, 36, made the decisive putt on the 18th hole on the final day of the 2012 Ryder Cup to help the Europeans pull off the “Miracle at Medinah,” overcoming a four-point deficit to beat the United States, 14 1/2 to 13 1/2.

Kaymer is a first-time assistant after four Ryder Cup appearances as a player.

Northern Ireland’s McDowell, 41, won the decisive singles match against Hunter Mahan to clinch Europe’s victory at the 2010 Ryder Cup by the same score.