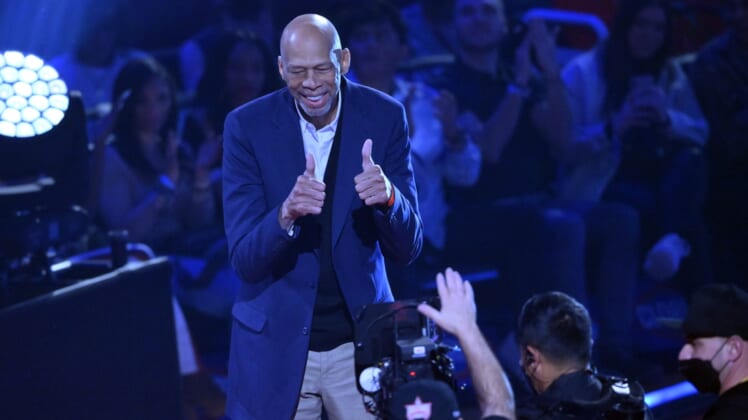 Carmelo Anthony received the Kareem Abdul-Jabbar Trophy for his work toward pursuing social justice and driving equality during the challenging 2020-21 season on Sunday. He was presented with the trophy before his Los Angeles Lakers hosted the Denver Nuggets.

But the biggest headline of the day came away from the trophy presentation, when Abdul-Jabbar addressed some of the actions of the past year of another future Hall of Famer on the Lakers, LeBron James.

The Los Angeles Times reported that Abdul-Jabbar said James should be “embarrassed” by some of his actions, which the Lakers’ elder statesman said “were beneath” James.

The actions included a fine James received earlier this season for directing an obscene gesture toward Indiana Pacers fans, as well as comments James made about the COVID-19 vaccine and a meme James posted that downplayed the seriousness of the virus.

On Sunday, Abdul-Jabbar said he expected more leadership from James when it came to activism but credited James for his work with kids in his native Akron, Ohio.

Still, while Abdul-Jabbar said James has spoken “quite forcefully and eloquently,” he’d like to see him do more and welcomes a chance to have a discussion.

“I wouldn’t mind doing it if he would take the time. I definitely got the time,” Abdul-Jabbar said about a future conversation. “I admire the things that he’s done that have gotten all our attention. Sending a whole school to college? Wow. That’s amazing. His thoughtfulness and willingness to back it up with his wallet, you got to give him credit for that.

“So I’m not throwing stones. I just wish he wouldn’t — you know, some of the things he’s done, he should be embarrassed about. That’s just where I’m coming from.”

James has moved into No. 2 on the all-time NBA scoring list with 37,062 points, trailing only Abdul-Jabbar (38,387). The 74-year-old Abdul-Jabbar said his discussion of James has nothing to do with the potential of a broken record.

“I’m all for him doing it. There’s no envy there,” Abdul-Jabbar said.