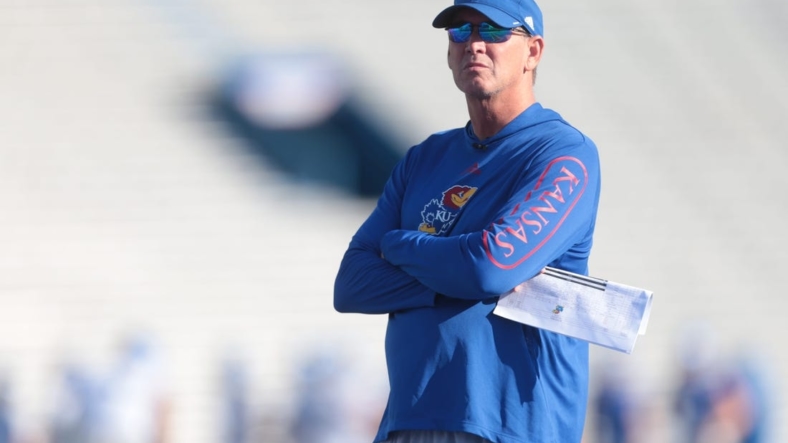 Kansas is home to the reigning national champions in men’s basketball, an annual powerhouse, but fans are also looking forward to football season for a change.

The season gets started Friday night as the Jayhawks open against FCS opponent Tennessee Tech in Lawrence, Kan.

The Jayhawks should have an advantage in personnel. But that’s not the main reason for optimism.

Head coach Lance Leipold enters his second season in Lawrence having led the Jayhawks to their first road conference win since 2008 when Kansas defeated Texas 57-56 in overtime in Austin late last season. A gutsy two-point conversion call paid off when walk-on tight end Jared Casey caught a pass just across the goal line for the winning points.

The Jayhawks have hopes of winning more than two games for the first time since 2019. To say it’s been a long climb for Leipold is an understatement. Since Mark Mangino’s last winning season (8-5) in 2008, Kansas has gone 28-125 overall, including 8-106 in the Big 12 Conference, with no more than one conference win in any season.

Leipold believes his team is ready for more success.

“There’s so many things that are different for the better,” Leipold said earlier this summer. “We’ve said many times, players know the coaches, know what to expect. We still have a fair amount of new guys going through their first practice, and there’s uncertainty and wandering around … everyone is understanding and we’re in a much better spot.”

Tennessee Tech is coming off a 3-8 season, including 1-5 in the Ohio Valley Conference.

The Golden Eagles are not planning on rolling over. They brought in transfer quarterback Jeremiah Oatsvall from Memphis, who’s going into his sixth season of college football. Running back David Gist and receiver Quinton Cross are among the best at their respective positions in the Ohio Valley.

“I was very pleased as far as the effort of the football team,” head coach Dewayne Alexander said after an intrasquad scrimmage Aug. 20. “It was very hard-hitting, very competitive. … Either your football team’s competitive and hard-nosed or they’re not. And our guys are. So that part is good. I know we’re going to show up and play hard.”