Kansas gets off to fast start in rout of Tennessee Tech 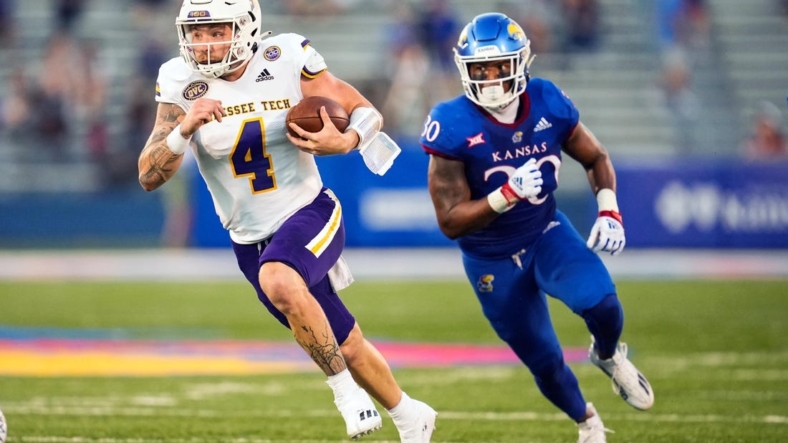 Starting quarterback Jalon Daniels was nearly spotless as Kansas demolished Tennessee Tech 56-10 in the opening game for both teams. Daniels was 15-of-18 for 189 yards with a rushing and a passing touchdown.

Kansas dominated in all aspects of the game, outgaining the Golden Eagles 502-190. They averaged 10.2 yards per play, compared to 2.8 for Tennessee Tech.

Things started well for Kansas. After forcing a three-and-out on Tennessee Tech’s first drive, the Jayhawks got the ball on the Tech 40. Four plays later, Devin Neal raced almost untouched 19 yards into the end zone for the first touchdown of the season and a 7-0 lead.

After another three-and-out, it took only two plays to put another touchdown on the board. Daniels found Quentin Skinner for 56 yards over the middle on the first play. Daniel Hishaw took it the final nine yards on the next play.

The Golden Eagles finally got untracked on offense, going 42 yards on 10 plays. But a field-goal attempt was blocked and returned 61 yards by Cobee Bryant for the Jayhawks’ third touchdown with 4:42 left in the first quarter.

Tennessee Tech finally got on the board in the second quarter with a 28-yard Nicolas Bigelow field goal following a fumbled punt by Kansas on its own 34.

Kansas took advantage of a short field for its next touchdown, punched in by Daniels on an 11-yard run, capping a 22-yard drive. Right before halftime, Daniels led a 63-yard touchdown drive in seven plays in 1:29 to give Kansas a 35-3 lead.

Tennessee Tech finished the first half with 16 of 31 plays with either no yards gained or losing yardage. Daniels, meanwhile, was 14-of-15 for 182 yards, with a passing and a rushing touchdown in the first half.

Tech missed a chip-shot field goal in the third quarter, and Neal answered with an 80-yard touchdown run on the next play for a 42-3 lead.

The Jayhawks added two more rushing touchdowns in the fourth quarter, one by Sevion Morrison and the other by Jason Bean.

Tech scored a touchdown late in the fourth to reach double-digits.