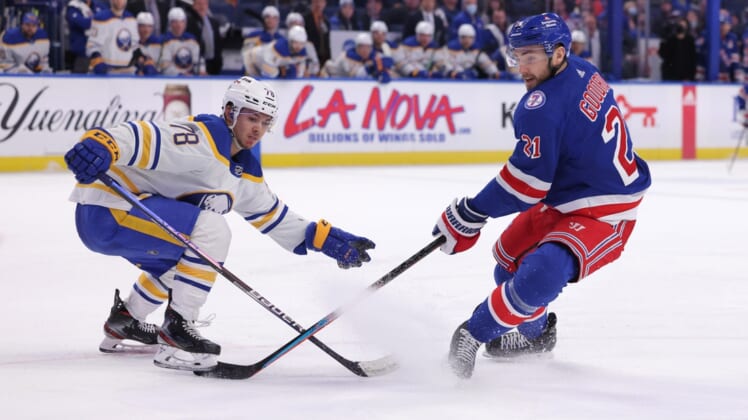 K’Andre Miller scored at 2:02 of overtime to give the New York Rangers a 5-4 win against the visiting Buffalo Sabres on Sunday.

Frank Vatrano scored twice, and Alexandar Georgiev made 13 saves for the Rangers.

Rasmus Dahlin had two assists for the Sabres. Craig Anderson made 26 saves.

He doubled the advantage just 18 seconds later, skating in alone on Anderson after picking off Sabres center Tage Thompson’s pass attempt. The quick strikes are the fastest two goals by a Rangers player since Jaromir Jagr tallied twice in 15 seconds on Nov. 12, 2005.

Rasmus Asplund got the Sabres on the board at 18:12 when Mattias Samuelsson found him open at the right side of the net to narrow it to 2-1.

Will Butcher tied it 2-2 at 2:06 of the second period with a laser from the slot.

Kyle Okposo drove down the left side and cut to the front of the net before slipping it through Georgiev’s pads to put Buffalo ahead 3-2 at 6:48.

Shortly after being denied by Anderson on a breakaway, Alexis Lafreniere took a feed from Filip Chytil on the rush, drove to the net from the left side and slid a backhander by the netminder at 11:46 to tie the score at 3.

Artemi Panarin put the Rangers back in front 4-3 at 3:52 of the third period. Anderson made a pad save on a point shot by Jacob Trouba and the rebound bounced to Panarin at the bottom of the right circle.

New York center Ryan Strome left the game after the first period with a lower-body injury.