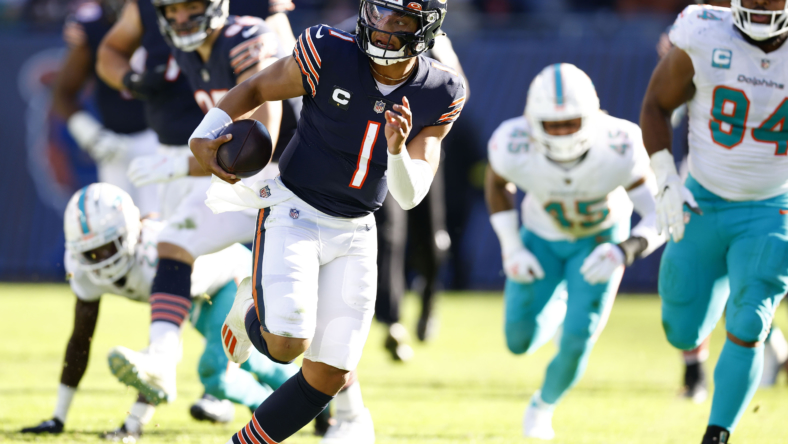 Chicago lost by the score of 35-32 as its final series of the game ended with a turnover on downs. But the fact that it kept this game close tells us a lot about the team under first-year head coach Matt Eberflus.

It was also a definining moment for a second-year quarterback in Fields who has drawn a ton of criticism for his play since Chicago made him a first-round pick in the 2021 NFL Draft.

Coming off a couple pretty solid performances, Fields put up a career-best outing against the Dolphins. In the process, he broke multiple single-game NFL records.

Fields became the first quarterback in league history with three touchdown passes and north of 140 rushing yards in the same outing.

He also broke the single-game regular-season rushing mark for a quarterback with 178 yards on the ground. He was absolutely electric throughout the afternoon in Miami.

Former San Francisco 49ers quarterback Colin Kaepernick holds the playoff record with 181 yards. He did that against the Green Bay packers back in January of 2013.

Justin Fields turning the corner for the Chicago Bears

The first three games of his sophomore season were an absolute disaster for Fields. That span saw him throw for a mere 297 yards with two touchdowns and four interceptions. He completed all of 23 passes during that three-game span.

Since then, the former Ohio State star has played extremely well as he learns the nuances of new offensive coordinator Luke Getsy’s scheme.

Chicago’s brass saw Fields’ growth even before his record-setting performance on Sunday. That’s especially true when it comes to the evolution of Chicago’s offense under the first-year coordinator.

“I think it’s teams that do too much, it’s hard to be good at it. And teams that are really, really good, they usually do what they do pretty well and then just make it look a little different to the defense or the defense makes it look a little different to the offense. Kind of the same thing. That’s the challenge of every coach across the league to find ways to do what your guys do well without letting it be so obvious or predictable.”

Chicago finds itself at 3-6 on the season. It’s not a playoff contender. But the team has proven to be much more competitive than most initially believed. Four of their six losses this season have come by one score.

It’s now all about Justin Fields progressing under center as the season moves forward. With games coming up against bad defenses in that of the Detroit Lions and Atlanta Falcons over the next two weeks, this process starts now.

As it is, Fields’ record-setting performance on Sunday must have the Bears and their fans feeling optimistic about his future.