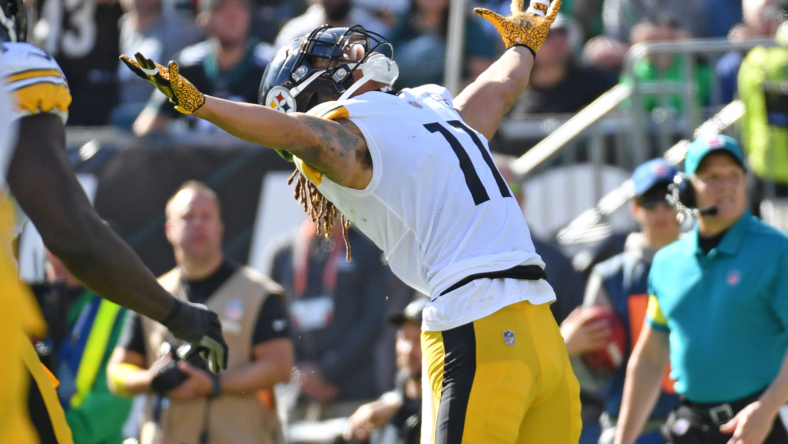 Thanks to Adam Schefter and several others, we now have the compensation for the Claypool trade:

Seemingly squeezed out of Pittsburgh thanks to the emergence of George Pickens, Claypool immediately becomes a top pass-catching weapon in the Chicago offense, just behind Darnell Mooney. Although, don’t expect Claypool’s target share to increase all that much, if at all.

The Bears are a run-heavy team, and adding Claypool won’t suddenly change that mindset. Yet, Claypool is the perfect addition to this Chicago offense.

At 6-foot-4, 238 pounds, Claypool has great size and has no issue using it to his advantage, whether that’s as a blocker dominating smaller cornerbacks and safeties or winning the 50-50 balls downfield.

Claypool showed such strong promise as a rookie, hauling in 62 catches for 873 yards and nine touchdowns. Unfortunately, he couldn’t build on that campaign while working with a struggling Pittsburgh offense. Claypool came close but couldn’t top his rookie numbers, finishing with 860 yards in his second season.

This year, Claypool’s been operating in an even smaller role, averaging just 38.9 yards per game. Expect that number to rise in Chicago, but he won’t suddenly start going off for multiple 100-yard games. At least not right away.

Either way, the Bears now have a speed demon with Mooney and a redzone threat with the big-bodied Claypool providing Fields with a massive target near the goal line.

Parting with a second-round pick that’s likely to be in the range of 35-45 may come back to bite them, but he’s also under contract through 2023 and at an affordable rate of $2.1 million, keeping their cap space open for an offseason spending spree. But more importantly, the arrival of Claypool gives the Bears a more fair chance at assessing what they have with Fields.