This run by Justin Fields likely had Chicago Bears fans ready to do cartwheels. 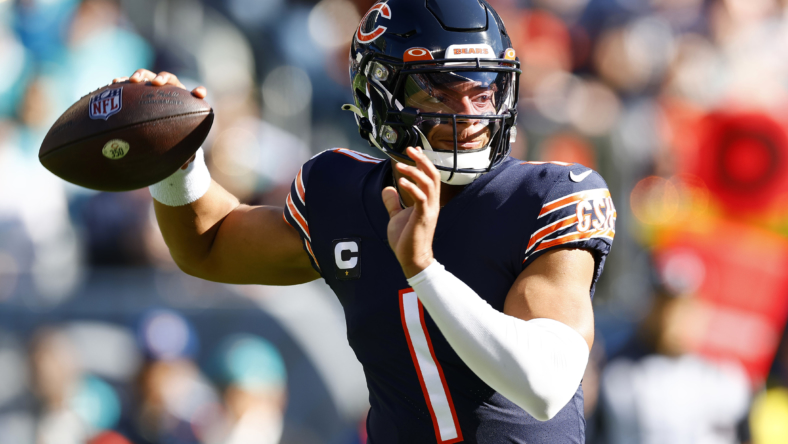 Chicago Bears second-year starting quarterback Justin Fields is slowly but surely starting to remind everyone of the other-worldly player we all witnessed at Ohio State, this time doing so by way of his feet with a 61-yard sprint to the end zone for the touchdown against the Miami Dolphins.

As seen in the highly entertaining TD run below, you’ll hear FOX’s excitable play-by-play announcer Kevin Harlan shout, “oh, he got a terrific block down there by Mooney!” but I’m not so sure said block made any difference whatsoever.

Because Fields, who stands 6-foot-3, looked like a gazelle who — at that point — needed approximately zero help in finding his way to paydirt.

Justin Fields’ 61-yard touchdown run was nothing short of glorious

All it took was a very unconvincing pump fake to basically juke the entire Dolphins’ defense and cruise right past nearly all of them.

When your offense can offer up that kind of “option” from your starting quarterback at any given moment, especially when that offense now has Chase Claypool running routes at wide receiver, things get very difficult and very uneasy for opposing defenses attempting to properly weigh its priorities.

The touchdown was Fields’s fourth rushing score of the season, with his previous long being a 39-yard scamper. It’s the longest rushing touchdown of the second-year pro’s NFL career.

Should the Bears go on to beat Miami, be sure to expect a steady feed of “Bear Down” and “Bears are Back” in your social media timelines for the next week.