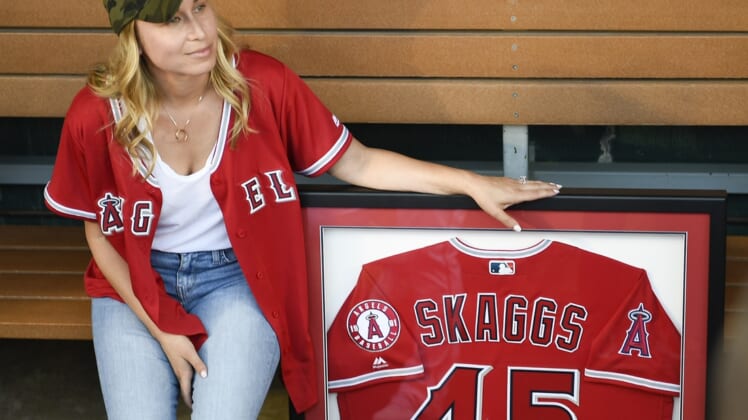 Jul 12, 2019; Anaheim, CA, USA; Wife of Los Angeles Angels starting pitcher Tyler Skaggs (45) Carli Skaggs sits next to a framed jersey for her husband prior to the game against the Seattle Mariners at Angel Stadium of Anaheim. Mandatory Credit: Kelvin Kuo-USA TODAY Sports

Kay was on trial in federal court in Fort Worth, Texas, on charges of drug distribution and drug conspiracy, and he was convicted on both counts.

Kay, 47, faces a minimum 20-year sentence and $1 million fine. Sentencing is set for June 28. He was taken into custody after the verdict was read.

The jury took less than three hours to reach its verdict.

Skaggs was found dead in a Texas hotel room on July 1, 2019, as the Angels were in the area to play the Texas Rangers. Skaggs was 27.

The autopsy revealed Skaggs died of asphyxia and had oxycodone, fentanyl and alcohol in his system. The jury found Kay guilty of distributing fentanyl and oxycodone, and providing Skaggs the fentanyl that resulted in his death.

The government argued successfully that Skaggs would not have died but for the fentanyl that was in the counterfeit oxycodone pills Kay gave to Skaggs in Texas.