Juan Soto, Nationals come from four down to beat Reds 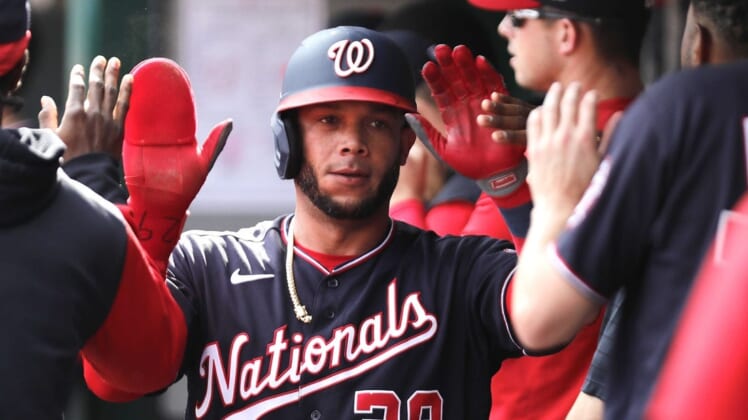 Juan Soto hit a pair of tape measure home runs and Luis Garcia had three hits and drove in four runs to rally the visiting Washington Nationals past the Cincinnati Reds 10-8 on Saturday.

Soto drove also drove in four runs while Nelson Cruz ignited a ninth-inning rally with his third hit of the game as the Nationals erased a four-run deficit to win their second straight game.

Kyle Finnegan (2-1) struck out the side in a perfect eighth to earn the win, while Tanner Rainey allowed a solo homer to Brandon Drury and a single to Tommy Pham in the ninth but still earned his seventh save in nine chances, and his second in as many games.

Cruz opened the ninth against Hunter Strickland (0-2) with a soft ground ball single to right field, and second baseman Matt Reynolds couldn’t handle Josh Bell’s bad-hop grounder, putting runners at first and third and none out. Strickland struck out Yadiel Hernandez before Reynolds dove to his right to stab a Keibert Ruiz liner for the second out.

But Maikel Franco singled to left-center to score pinch-runner Victor Robles, and Garcia singled home two more runs for insurance. Washington manager Davey Martinez was ejected prior to the bottom of the ninth for arguing balls and strikes.

Juan Soto drilled a high splitter from Cincinnati starter Tyler Mahle an estimated 423 feet off the batter’s eye in straightaway center to open the fourth, igniting a three-run inning.

But Mahle rebounded with scoreless innings in the fifth and sixth for his fourth quality start in five outings.

In the fifth, with the Reds trailing 3-2, Albert Almora Jr. belted a hanging, letter-high breaking ball from Washington reliever Jordan Weems several rows deep into the left field seats for his second career grand slam and a 7-3 Cincinnati lead.

Usually reliable Red reliever Alexis Diaz suffered one of his rougher outings in the seventh when Cesar Hernandez doubled and Lane Thomas singled with one out, setting up Soto, who drove a Diaz fastball 419 feet to right for his second homer of the day, cutting Cincinnati’s lead down to 7-6.

In the eighth, Reds reliever Tony Santillan threw a wild pitch that allowed Franco to go from first to third, and he scored the tying run on Garcia’s double to right.

After Pham’s single in the ninth, Joey Votto flew out and Tyler Stephenson struck out against Rainey as potential tying runs to end the game.