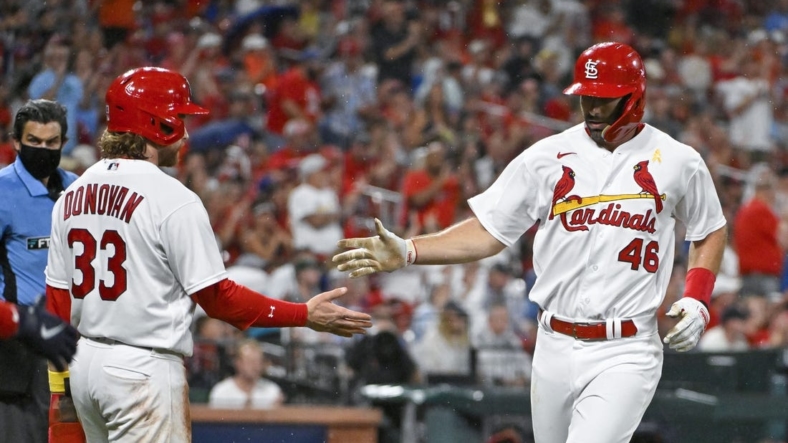 Jordan Montgomery (8-3) threw six-plus scoreless innings for the Cardinals, who won for the fifth time in six games. Montgomery allowed seven hits and two walks while striking out four.

The Cubs missed an opportunity to score first. Nick Madrigal led off the game with a single and reached third on Seiya Suzuki’s single.

Madrigal was thrown out trying to score on Franmil Reyes’ grounder to third baseman Nolan Arenado, and then Ian Happ and Nico Hoerner struck out.

The Cardinals took a 2-0 lead in the bottom of the first inning. Brendan Donovan and Paul Goldschmidt walked with one out, moved up on a groundout, then scored on Tyler O’Neill’s single.

Sampson skirted danger in the second inning. Yadier Molina hit a leadoff double and took third on Tommy Edman’s single, but Nootbaar popped out and Donovan hit into a double play.

The Cubs threatened in the third inning when Christopher Morel walked leading off and Madrigal bunted for a hit. Reyes walked to load the bases with one out, but Happ grounded into a double play.

The Cardinals boosted their lead to 3-0 in the sixth inning when O’Neill hit a two-out single, stole second base and scored on Corey Dickerson’s single.

The Cubs knocked Montgomery out of the game in the seventh inning when P.J. Higgins and Yan Gomes opened the frame with singles. Reliever Jordan Hicks came on to strike out the next three batters.

Nootbaar’s two-run homer in the bottom of the inning made it 5-0, and the Cardinals added on in the eighth inning with Edman’s three-run shot. Both homers came off Sean Newcomb.