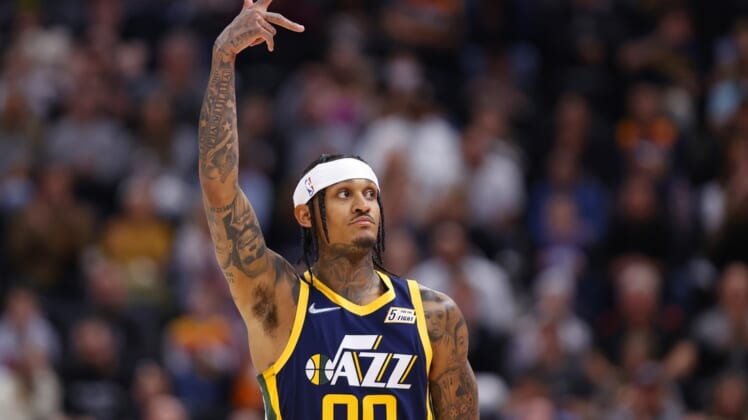 Mike Conley didn’t play for the Utah Jazz in Saturday night’s game against the Sacramento Kings, yet he still played a role in their 134-125 win.

Before the game, Conley lit a flame inside of Jordan Clarkson by telling him he was due for an offensive explosion. According to Clarkson, Conley noted that he had not erupted offensively all season and added, “It’s time you went off for 40.” That message, Clarkson said, “started pinging around in my head and shots started falling.”

The Milwaukee Bucks, who play the Jazz at Salt Lake City on Monday night, were on the other end of a scoring outburst from a player looking to get into a groove. Klay Thompson led Golden State to a 122-109 win with 38 points and eight 3-pointers. It was Thompson’s second 30-point outing since his comeback from being sidelined 2 1/2 years due to knee and Achilles surgeries.

“It felt like tonight was one of those nights where Klay was going to make some shots that were tough, that were well-defended,” Bucks coach Mike Budenholzer said. “His offense and his shooting were just better than what we could defend. Credit to him. He had a great night.”

As usual, Giannis Antetokounmpo also had a big game, scoring 31 points with eight rebounds, but it wasn’t quite enough to help Milwaukee continue a winning streak that was stopped at six.

Clarkson had a monster night at home as the Jazz rebounded from a Friday night loss in San Antonio. The reigning Sixth Man of the Year recorded a career-high 45 points with seven 3s. In doing so, Clarkson set a franchise record for points off the bench in a game.

“I’m not surprised at all. We all know how good he can be,” Jazz forward Bojan Bogdanovic said of Clarkson. “But his efficiency tonight to have 45 points on just 21 shots is really impressive.”

Clarkson hit 15 of 21 field goals, including all eight within the arc. He also shot 8-for-8 from the free-throw line.

“As a shooter and a scorer, when you shoot like that early, you kind of sense it would be his night,” Jazz guard Donovan Mitchell said. “He continuously hit the right shots at the right time.”

Bogdanovic and Mitchell had nice nights as well, with 26 and 25 points respectively. Hassan Whiteside also filled in well at center for injured Rudy Gobert, who missed the game with a left foot injury. Whiteside hauled in 21 rebounds, blocked three shots and scored 12.

Conley should return against the Bucks, and it’s possible Gobert will too. ESPN reported that there’s “optimism” Gobert won’t miss any more time because of the left foot strain.

The Bucks, already missing George Hill, Pat Connaughton and Brook Lopez due to injuries, might be without DeAndre’ Bembry the rest of the season, ESPN reported. The recently-acquired Bembry injured his knee Saturday and was scheduled to undergo imaging Sunday to assess the extent of the damage.

Utah beat Milwaukee in the teams’ first meeting this season, 107-95 on Halloween night.