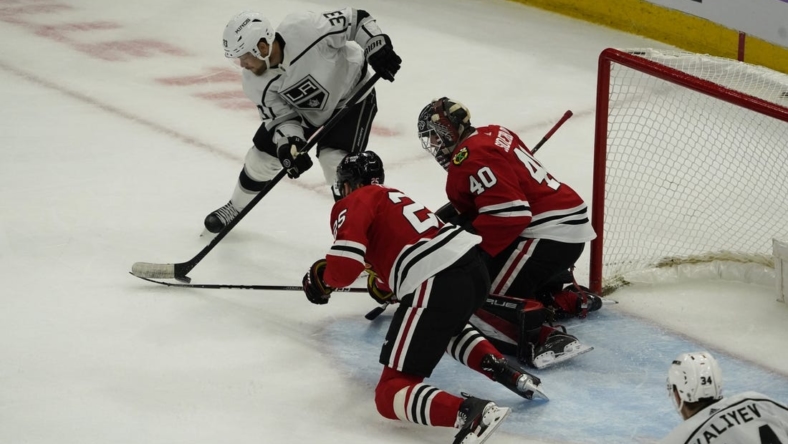 Jonathan Toews scored the winning goal at 1:31 of overtime and the Chicago Blackhawks defeated the visiting Los Angeles Kings 2-1 on Thursday night.

Toews started the winning series by claiming a faceoff in his own end. He eventually carried into the zone, and Jake McCabe controlled a bouncing puck to the left of Jonathan Quick and slid a pass across the slot to Toews, who knocked it in.

Jason Dickinson also scored for the Blackhawks, who ended a four-game losing streak (0-2-2). Caleb Jones picked up his sixth assist in his past six games for Chicago and Arvid Soderblom made 32 saves.

Soderblom was making his second start of the season and his sixth NHL appearance as Chicago is without its top two goalies, Petr Mrazek (groin strain) and Alex Stalock (concussion protocol).

Blake Lizotte scored for the Kings, who finished their road trip 1-2-0. Quick made 17 saves.

The Blackhawks took a 1-0 lead at 12:54 of the second period. Jones received a pass at the right point and centered into the slot, where Dickinson redirected the puck past the sliding Quick.

It was just the third time this season that the Blackhawks had scored the first goal of the game.

The Kings tied it 1-1 on the rush at 16:24. Arthur Kaliyev came in along the right boards, got behind the defense and centered to Lizotte, who also had gotten behind a defenseman and scored from the slot.

Soderblom made a strong glove save on Kevin Fiala alone in front with just under four minutes remaining in regulation.

Chicago had several chances when Viktor Arvidsson lost his stick in the defensive zone, but the Blackhawks couldn’t put the puck in.

The Kings were 0-for2 on the power play; the Blackhawks were 0-for-1.