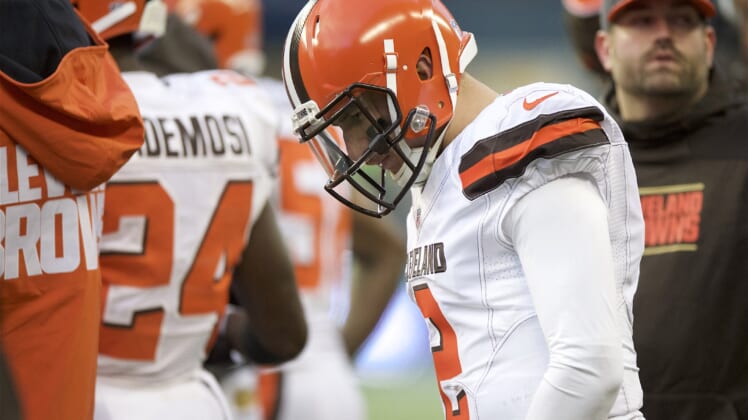 Former Cleveland Browns first-round pick Johnny Manziel is attempting to make a comeback after sitting out all of last season while atttempting to sober himself up off the field.

Interestingy enough, Manziel is the last Browns quarterback to actually win a football game for the team on a Sunday. That came all the way back in December of 2015.

Now, as he attempts to return to the gridiron, Manziel is apparently out here trolling his former Browns team after they finished the 2017 campaign with a 0-16 record.

For the purpose of full disclosure, it appears that Manziel edited this Instagram post to remove the caption.

The Browns have been a butt of pretty much all jokes over the past couple years. They followed up a 1-15 2016 campaign by becoming just the second team to go winless during a 16-game regular season. Browns fans were out in force on Saturday celebrating said accomplishment, much to the chagrin of at least one member of the team.

As it relates to Manziel, maybe he should continue to keep a low profile. The former Heisman winner will be suspended four games once he signs with a team for multiple violations of the league’s substance abuse policy. Continued shows of immaturity won’t do him well in his attempt to return to the NFL.

Manziel seemingly understood this by deleting the caption in Sunday’s Instagram post. Then again, everything is forever on this here Internet. Manziel should have known that.