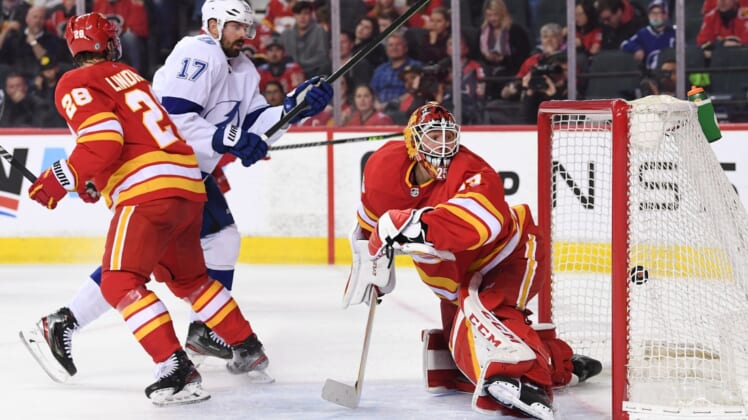 Johnny Gaudreau produced his first hat trick in three years and Jacob Markstrom made 30 saves as the Calgary Flames added another impressive victory to their collection, defeating the visiting Tampa Bay Lightning 4-1 on Thursday.

Mikael Backlund added a goal and Rasmus Andersson had two assists as the Flames improved to 15-2-1 since Jan. 29.

Calgary rebounded from a rare defeat Tuesday against the Washington Capitals and added a victory over the two-time defending champion Lightning to one over the league-leading Colorado Avalanche on Saturday.

Alex Killorn scored for the Lightning and goalie Andrei Vasilevskiy made 28 saves as Tampa Bay lost its second consecutive game. It is the first time the Lightning have dropped back-to-back games since a three-game losing streak Dec. 30-Jan. 2.

While Vasilevskiy was adept at stopping shots in front of him, his undoing was shots from outside his field of view. Gaudreau’s first two goals came on shots that rebounded off Vasilevskiy’s back and into the goal.

Gaudreau gave the Flames a 1-0 lead on the power play at 7:35 of the first period. He found a loose puck to the side of the Flames’ goal after a shot by Tyler Toffoli and fired it off Vasilevskiy and into the net.

Killorn got the Lightning even at 15:40 of the second period, his 18th, but just over three minutes later, Gaudreau was at it again, getting a successful rebound off the Lightning goaltender.

A mere 52 seconds after Gaudreau’s second goal, Backlund scored his ninth of the season when he tipped Erik Gudbranson’s long pass from outside the right circle into the Tampa Bay goal.

Gaudreau’s third of the game and 26th of the season came with just over six minutes remaining after a pass by Elias Lindholm from behind the goal. Gaudreau increased his team-leading point total to 77 thanks to his sixth career hat trick.

Linesman Jesse Marquis missed just over half of the game after he was hit in the head by a puck and had to be helped off the ice.