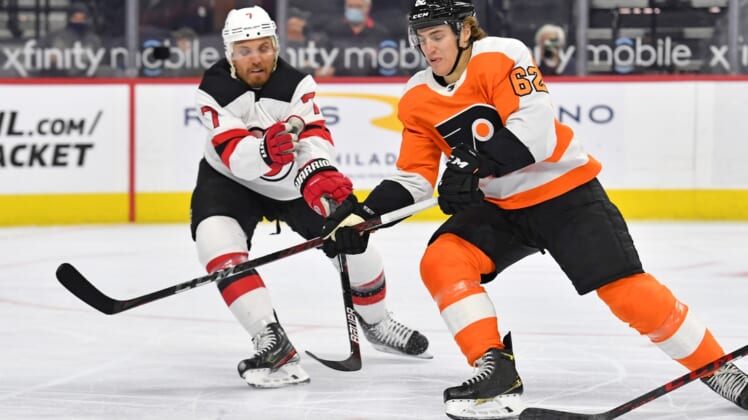 Joel Farabee scored two goals to lift the host Philadelphia Flyers past the New Jersey Devils 4-2 in the regular season finale for both teams on Monday.

Neither team qualified for the playoffs.

Sean Couturier added one goal and one assist while James van Riemsdyk also had one goal for the Flyers (25-23-8, 58 points).

The Devils jumped out to a 1-0 lead at 3:29 of the first period when Zacha received a pass in front and tapped the puck past Elliott.

Kuokkanen soon took advantage of a Flyers turnover in their own zone and fired a shot from a tough angle for a 2-0 Devils advantage at 5:21.

The Flyers closed within 2-1 at 13:44 of the first when Farabee scored his team-leading 19th goal. Kevin Hayes earned his 300th career point with one of the assists.

The Flyers came out aggressive in the second and dominated the tempo. The hard work paid off as Couturier tied the game at 10:06. The puck clanged off Claude Giroux’s skate and Couturier capitalized.

Wedgewood made several stellar saves in the final few minutes to keep the game even as the teams went to their respective locker rooms.

Philadelphia nearly went ahead at 2:16 of the third, but Wedgewood stopped Scott Laughton’s shot from point blank range.

The Devils were awarded a power play at 3:43 after Nicolas Aube-Kubel was whistled for hooking. The Flyers, who have struggled short-handed in recent games, killed off the penalty.

When van Riemsdyk connected on the power play at 12:25, the Flyers moved ahead 3-2.

Wedgewood was pulled for an extra skater with 1:23 remaining, but the Devils were unable to score.