Joe Haden Speaks to the Ignorant Public: “Open Up Your Vocabulary, People”

Cleveland Browns cornerback Joe Haden is the first NFL player to represent the Special Olympics as a Global Ambassador.

Haden became involved in the Special Olympics because of the close relationship he has with younger brother, Jacob, who is five years his junior. Jacob has a cognitive disorder that impedes his speech and language. 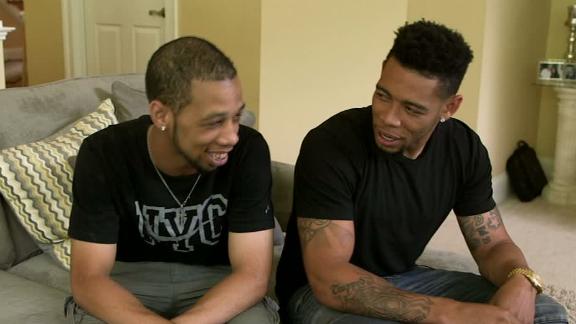 We can tell that Haden adores his brother:

“He’s just a really cool kid, a blessing to me and my family,” says Haden, via ESPN.com. “I play for him, and I would do anything for him.”

Since Haden is associated with this wonderful organization, he is on a mission to stop people from using the degrading “R” word. Haden is referring to the one that consists of eight letters and three syllables and is improperly used to classify persons with disabilities.

Additionally, the “R” word has been commonly used for years by bullies who feel the need to put others down while making themselves feel superior.

Taking a stance in  a movement called “Spread the Word to End the Word,” Haden stated this:

“Open up your vocabulary, people. The R-word is hurtful, hateful and ignorant. Like the N-word, it should not be part of our language.”

“Spread the Word to End the Word” was created in February of 2009. It now contains over 500,000 online pledges to end the use of the “R” word and other degrading slurs.

It is reported that James tossed the word out twice when he dismissed questions by the press he thought were stupid. The second time James used the word, he received major flak that led him to issue this apology:

“I used the word ‘retarded’ before. Obviously, it had nothing to do with kids that are underprivileged. There’s no knock on them. It’s a word that’s been around for a long time where I grew (up). It’s a bad habit, so I try to break it. If I use it again, I’m going to try to do my best not to. I mean no disrespect.”

As for Flacco, he is also active in the Special Olympics and he neglectfully used the term when he was asked his thoughts on holding Super Bowl XLVI in a cold weather city. After the slip, Flacco immediately issued an apology and then apologized again to the Special Olympics at an event he attended a couple of months afterwards. Flacco and two team members signed the pledge to stop using the word.

While Haden and James do work in the same city, the Browns defensive back indicated that he’s never spoken to James regarding this topic.

“I think he’s learned that lesson,” says Haden. “Besides, there are other lessons to learn. I would encourage him, or anyone, to go to a Special Olympics event. That’s where you’ll see the pure joy of competition, a joy we should all remember, no matter how big we get.”

We can certainly all take a lesson from this story and choose our words more carefully moving forward.