With New York Jets starting quarterback Zach Wilson sidelined for the next month with a bone bruise and tear in his meniscus, it looks like 14-year NFL veteran Joe Flacco is making the most of the new opportunity and impressing since taking over the offense this week.

The Jets got very lucky this week when it was revealed that Wilson will not need more time than the original estimates to recover from the injuries he suffered in the team’s first preseason game of 2022. Fans no longer have to worry about their starting signal caller missing an entire season due to a major ligament tear in his knee. And there is a very real possibility that the 23-year-old could be back for the team’s season opener against the Baltimore Ravens on Sept. 11.

In the event that he isn’t ready for Week 1 or the game after, New York will lean on 37-year-old Joe Flacco to steer the offense through the rest of the preseason and the early weeks of the regular season. It’s a thought that has not thrilled some Jets fans since the New Jersey native is well past his prime years, and os 0-5 in the games he has started for the team over the last two seasons.

However, there is a reason to be hopeful Gang Green fans, because the team’s temporary starting QB has actually been looking very good in camp since taking over first-team reps. Even better than Wilson in certain areas. Earlier this week, The Athletic’s Jets beat writer Zack Rosenblatt reported that the one-time Super Bowl-winning QB was “on fire” in practice at the start of the week and led the offense to some of its best play all summer.

Obviously, the Jets’ success in 2022 will hinge on the play of Wilson and not Flacco, but if the young starter has setbacks in his recovery it is good to see that Flacco is playing well in his third season with the team. 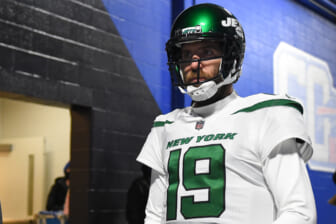 Experience has its advantages, and the former Ravens star excelling in end zone series’ — an area where Wilson faltered in camp — is important if Jets supporters hope he can scrape out a win or two while Wilson is out.