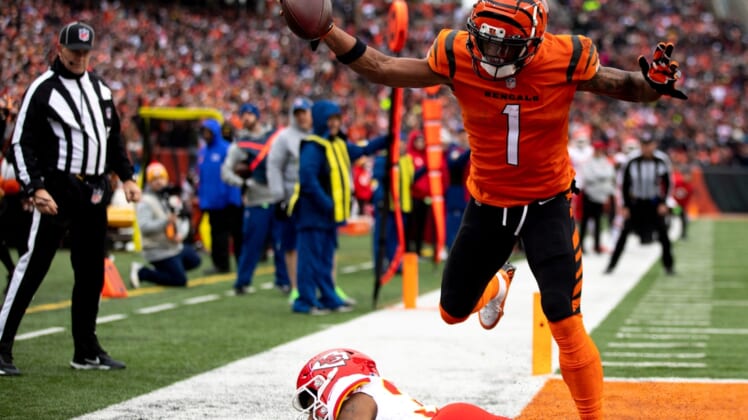 Evan McPherson kicked a 20-yard game-winning field goal as time expired after the Bengals did not score a TD on several goal-to-go opportunities from the 1.

A Kansas City penalty for illegal use of hands gave Cincinnati a new set of downs. The Bengals kneeled the ball on first down and spiked it on second before McPherson came on.

Burrow went 30-for-39 and executed a second-half comeback after the Bengals (10-6) trailed by as many as 14. They used 17 consecutive points to gain their first lead with 11:44 remaining.

Joe Mixon added 86 yards from scrimmage on 19 touches for Cincinnati.

Kansas City (11-5) dropped to second in the chase for the top AFC playoff seed behind Tennessee, despite a 259-yard passing performance by Patrick Mahomes.

Mahomes went 26-for-35 with two touchdowns, but only guided the Chiefs to three second-half points as the Bengals capitalized with a 17-3 second-half scoring edge. Kansas City had allowed just 12.9 points on average during its eight-game win streak, which ended Sunday.

The Chiefs almost closed the half with a touchdown return on a kickoff, but the runback by Byron Pringle got nullified by a holding penalty.

Kansas City played without two tackles after Orlando Brown hurt his calf in warmups and Lucas Niang suffered a knee injury on its seventh play.

Burrow completed his first eight attempts and threw for 193 yards in the first half, finding Chase for touchdowns of 72 and 18 yards before McPherson tacked on a 46-yard field goal with 41 seconds left. Chase had five first-half catches for 111 yards but the Bengals started slow, allowing critical sacks to halt their first two possessions.