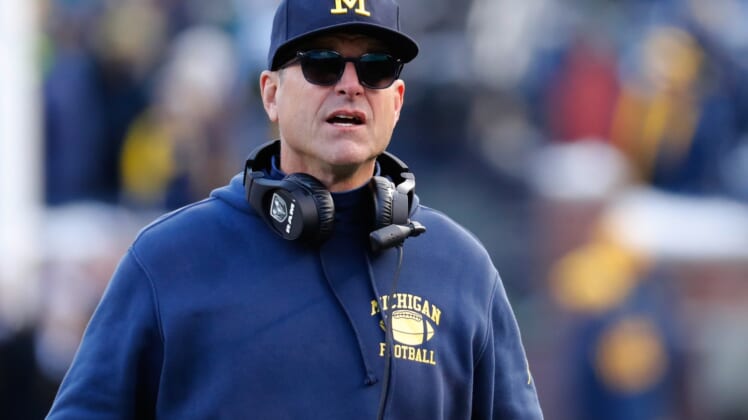 Michigan Wolverines head coach Jim Harbaugh has been in the spotlight of NFL coaching rumors for weeks, with the former San Francisco 49ers coach attracting interest from multiple teams. While many hoped he would return to the NFL, that won’t be happening in 2021.

With Michigan coming off a disappointing 2-4 season, partially the result of complications created during the COVID-19 pandemic, many thought the 57-year-old coach could return to the NFL. Instead, Harbaugh turned it into an even longer stay with Michigan.

According to The Athletic’s Nick Baumgardner, Michigan was closing in on a five-year contract extension with head coach Jim Harbaugh early Friday, and 247Sports’ Zach Shaw confirmed the new contract was fully agreed to later in the day. The deal comes with a $4 million base salary over each of the five seasons, but Harbaugh can hit incentives to make that $8 million annually.

Following the program’s two-win season, Harbaugh was reportedly considering a return to the NFL. While he only lasted four seasons with the San Francisco 49ers, the team made three NFC Championship Game appearances and posted a 44-19-1 record in the regular season under his direction.

Hired by Michigan in 2015, the program has experienced mixed results in the Harbaugh era. The Wolverines went 10-3 in each of their first two seasons, with a 1-1 record in bowl games. The program experienced a setback in 2017, finishing with an 8-5 record and was unranked in the AP’s final top-25 poll after a loss in the Outback Bowl.

Michigan rebounded with a 10-3 mark in 2018, but a 41-15 loss to the Florida Gators in the Peach Bowl ended the year on a sour note. After finishing with a 9-4 record in 2019, many anticipated the 2020 season would be a transition year for the Wolverines.

After knocking off Minnesota 49-24 to open the shortened 2020 schedule, Michigan lost its next three games. Its final loss came to Penn State, who was winless at the time of their meeting. The Wolverines’ final three games, including a rivalry matchup against Ohio State, were canceled due to COVID-19 outbreaks.

Related: Michigan Wolverines would have suffered a staggering financial blow without college football

The coronavirus pandemic is estimated to have cost Michigan’s athletic department tens of millions of dollars. As a result, Harbaugh and other coaches and athletic staff had to take pay reductions this year.

After making $7.5 million annually before the 2020 college football season, Harbaugh will be taking a significant pay cut under his new contract. However, the opportunity exists for him to make that money back and some of the created funds could go towards hiring a better coaching staff.

Notably, the buyout on Jim Harbaugh’s contract will also reportedly drop under the new extension. While a specific figure isn’t known, Baumgardner noted that the number is significantly lower. If the Wolverines have another disappointing season, it will be easier for the program to move on from a head coach who has zero wins against Ohio State.