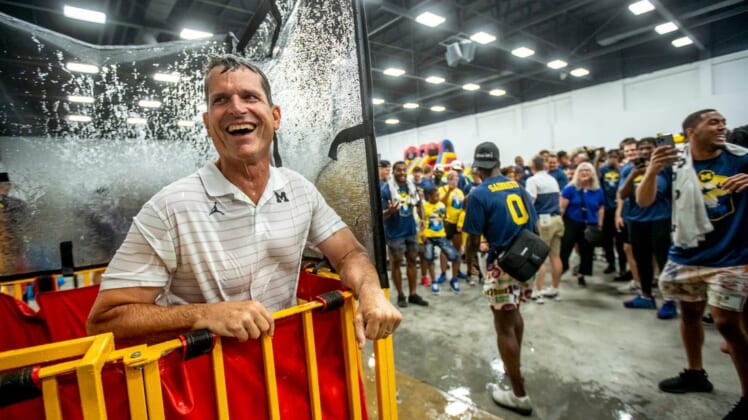 Michigan coach Jim Harbaugh laid out his goals for the 2022 season – including winning the national championship – with either Cade McNamara or J.J. McCarthy under center.

Harbaugh, speaking at Big Ten Media Days in Indianapolis, made clear it’s an open competition between the quarterbacks, both of whom had “phenomenal seasons” in 2021. McNamara was the starter last season, passing for 2,576 yards and 15 touchdowns.

“The best player is going to play,” Harbaugh said.

McCarthy threw for 516 yards and five TDs while rushing for 124 yards and two scores.

“A really cool stat on Cade McNamara is over 50 percent of his drives end in points,” Harbaugh said. “I don’t know exactly what the number is for JJ, but it seems like every time he got in there and led a drive it ended in points as well.”

While that competition begins Aug. 3 when preseason camp kicks off, Harbaugh pinpointed the four goals for the Wolverines in 2022, two of which the team checked off last season.

“Our goals would be to beat Ohio State and Michigan State in the same year, win the Big Ten championship and win the national championship,” Harbaugh said. “Those are our four goals.”

The Wolverines beat Ohio State last season for the first time since 2011 but suffered their only regular-season loss to Michigan State.

Harbaugh guided the Wolverines to the Big Ten championship and College Football Playoff in 2021. They lost to eventual champion Georgia in the semifinals. Harbaugh was named the 2021 Associated Press Coach of the Year.

The Big Ten title was the school’s first since 2004.

Harbaugh is also coaching under a new contract he inked in February. Harbaugh will make $7.05 million this season, the first year of his reworked five-year contract. The new deal makes Harbaugh the second-highest paid coach in the Big Ten behind Michigan State’s Mel Tucker.

He owns a 61-24 record during his seven seasons at Michigan, his alma mater.